A Central Park Elopement in the Snow

Posted on February 28, 2015 by wedincentralpark

Nicola and Nicholas eloped to New York this February to get married in Central Park. They go by Nicki and Nicky, so now they are married they are both Nicki/y Blair!  They live in Dunfermline in Scotland with their cat Fu. They were together for a year and a half before they got married, they met at a leaving party of a mutual work colleague.

Their engagement was a low-key one, Nicki said that she would have been embarrassed by a big, elaborate proposal. Nicki says that she is quite a shy person so, it seemed only natural for them to elope. The couple felt ready to start a family together and they wanted to be married first, so it was important to them to have the ceremony, but they did not feel that a big wedding where they would be on show would suit them. Nicki said that she had always dreamed of a wedding in Central Park and Nicky was very keen to visit New York so they decided to get married here and then to have a reception when they got home.

They were getting married in February so Nicki and Nicky knew that they had to dress for cold weather, but they did worry a little about the weather, this is unavoidable with an outdoor wedding location, but they had chosen the Ladies’ Pavilion so they would have had some shelter from a little rain. “The only time it snowed during our trip was during our wedding and it was absolutely beautiful,” said Nicki. I agree, I do love the photos of our weddings in the Winter. “The Ladies’ Pavilion was very quiet and romantic, although that could have been because it was so cold, said Nicki, another reason to get married in Central Park in the Winter.

Nicki and Nicky had no guests. “Not all of our family were able to attend and we would have liked either everyone there or just the two of us,” said Nicki. They had a reception back home in Scotland on their return, though, so that everyone could celebrate with them then. We videoed their wedding ceremony for them to show to their family and friends back home at the reception.

Nicki wore a classic lace dress, purchased from The Glass Slipper in Dunfermline. We had a bouquet of dusky pink roses delivered to her hotel for her that morning. Nicky wore the family tartan kilt outfit. Nicki did her hair and makeup herself. They had a guitarist play before and after their ceremony, singing some songs from a list that Nicki and Nicky had given me in advance of choices that were special to them. 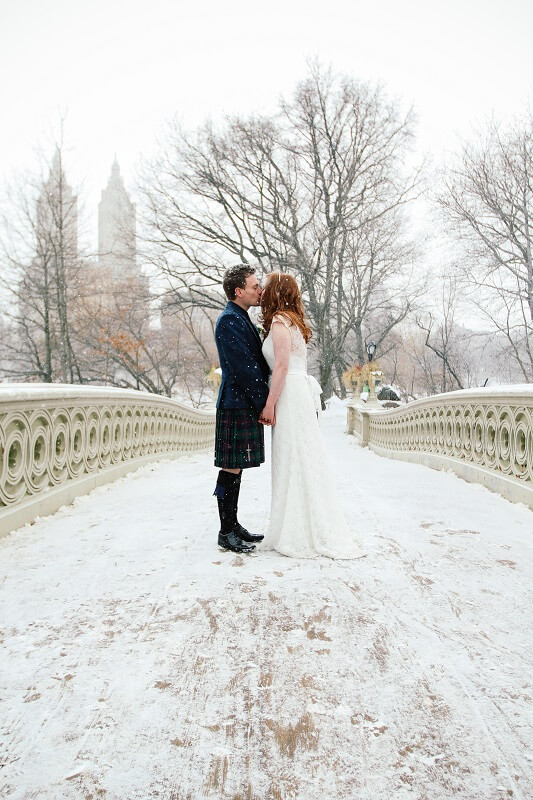 After their ceremony they spent some time having their photographs, some with coats on, some briefly without, then a little time walking around the city, including some photos at Grand Central.  After that they went back to their hotel, ROW NYC Hotel, to Skype all of their family to tell them that they were married, “and then we went and ate our body weight in pizza!” said Nicki. They liked their hotel, I asked them if they would recommend anywhere specially and they said “we would recommend Jekyll and Hyde for a unique dining experience. For drinks we both loved Barcade, a bar filled with 80s arcade games.” 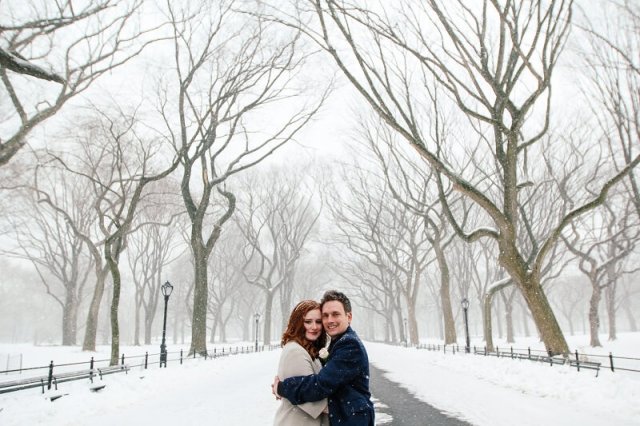 “We had a wonderful time,” said Nicki, “we both knew how cold it was going to be and dressed appropriately. It is quite a unique venue so I think you are either going to love or hate it. We knew as soon as we saw it that we had made the right decision, we had the perfect day.” 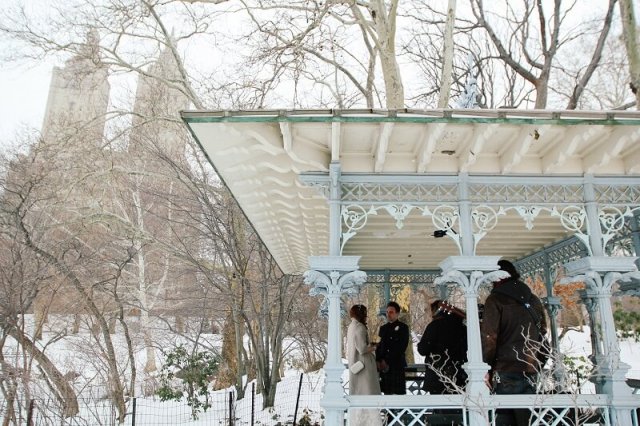 “Claire was fantastic, I can’t believe how easy it was to arrange. The day went flawlessly. Thank you Claire! A very happy bride!” Thank you for sharing your story with us, Nicki and Nicky, I wish you the best of luck for your futures together. For more information on planning your own Central Park wedding, visit our website, or “like” us on Facebook for photos and more inspiring stories.

4 Responses to A Central Park Elopement in the Snow