Posted on April 2, 2020 by wedincentralpark Alex and Tom brought eighteen grown up guests and three children over with them from the UK for their destination wedding in the Conservatory Gardens in August.  They had been together for six and a half years when they got married. 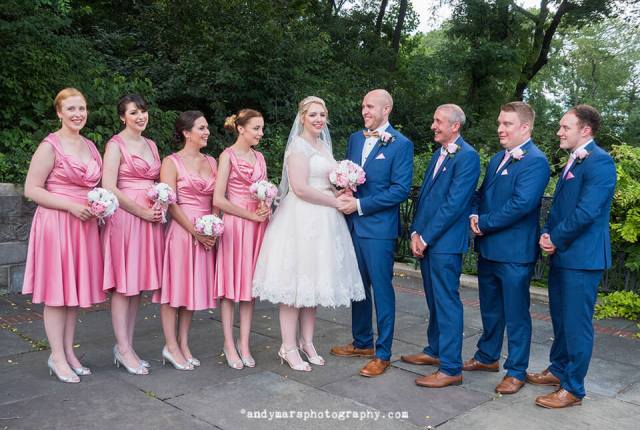 The couple met at high school when they were both fourteen.  They we close friends for years and went to their high school prom together, but didn’t become a couple until eight years later. Alex and Tom are British, but had spent some time living in Australia before getting married.  After the wedding they moved back to the UK. 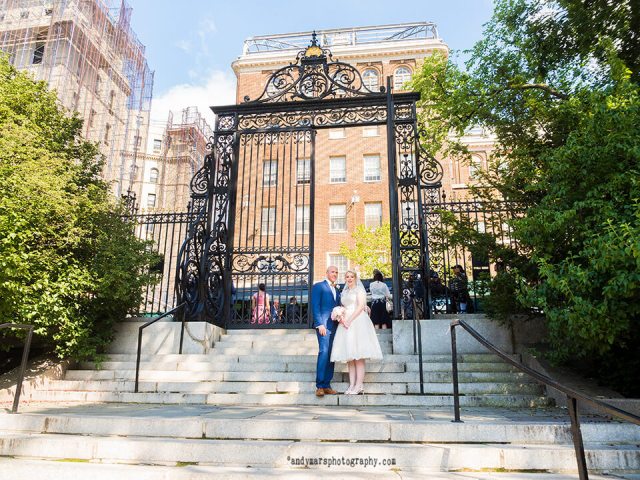 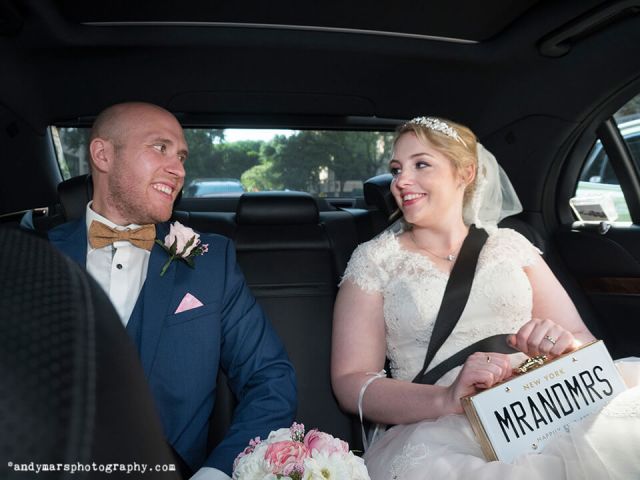 They had their ceremony underneath the Wisteria Pergola in the Conservatory Gardens. The wisteria had grown sufficiently by August to provide good shade from the sunshine for the group. If you’re considering a wedding in the Conservatory Gardens, please note that a permit for a wedding there carries a higher charge than the other wedding ceremony locations in Central Park. 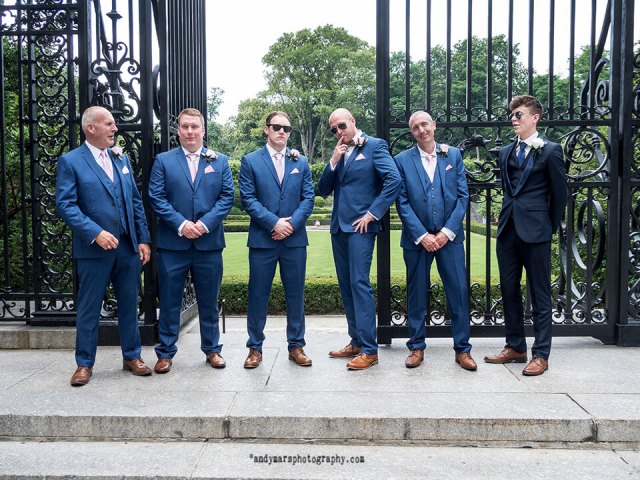 We arranged for a violinist to play for the guests while they waited for the bride to arrive.  We had the photographer meet the bride and her party at the striking Vanderbilt Gate entrance to the Conservatory Gardens. 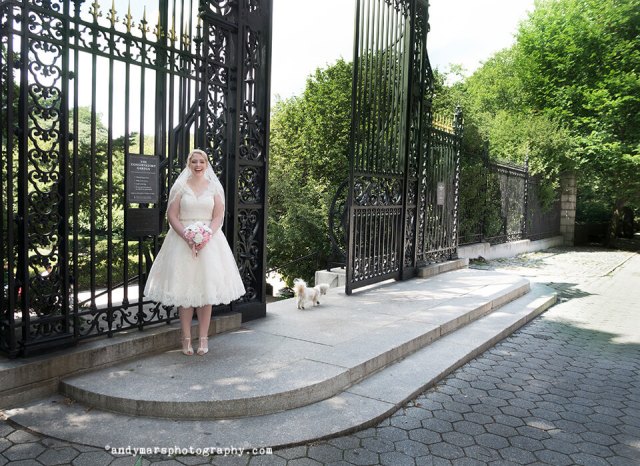 The bride walked in to the ceremony with her father to the violinist playing Pachellbel’s Canon; a very popular choice.  After they were pronounced married, she played the Wedding March and then went back to some classical pieces as background music while they signed the paperwork and took group photos in the area. 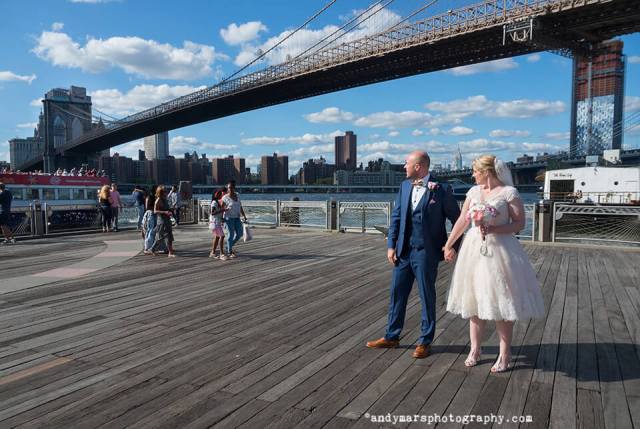 Their photographer Andy Mars took the group around the Conservatory Gardens for photos after the ceremony. The couple had decided that they didn’t need to go to the center area of the park for any photos. 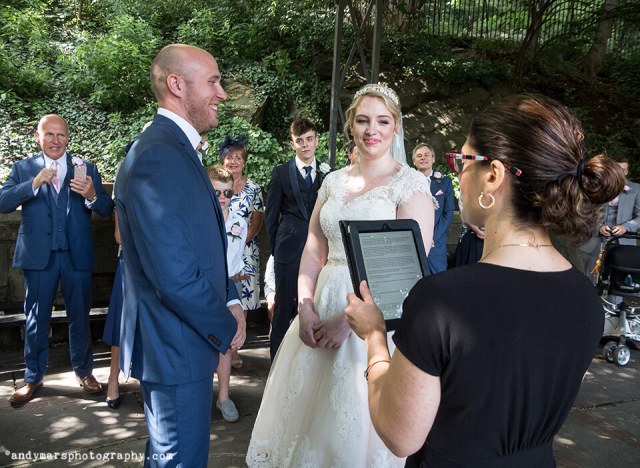 After the photos in the Conservatory Gardens the guests went over to the reception location of Frankies Spuntino in Brooklyn. It’s a great choice to have the reception over in Brooklyn if you’d like to take photos over on that side of the East River. It saves a lot of travel time. 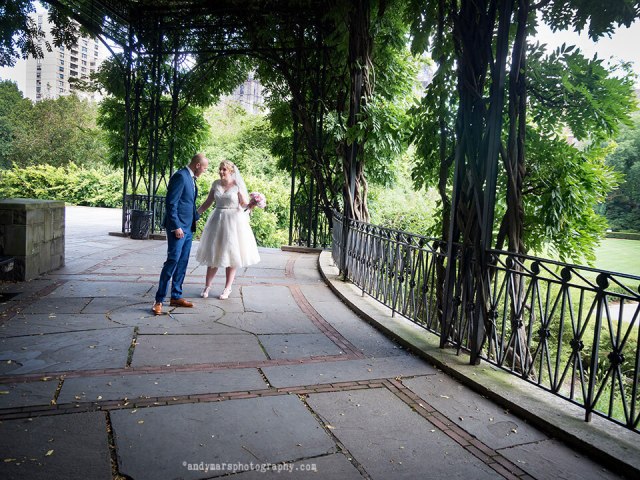 Alex and Tom went with the photographer alone in a car to the ferry landing over in Brooklyn Bridge Park for photos there with the Brooklyn Bridge and the Manhattan skyline in the background.  Then Andy came with them to the restaurant for a few quick photos before leaving. 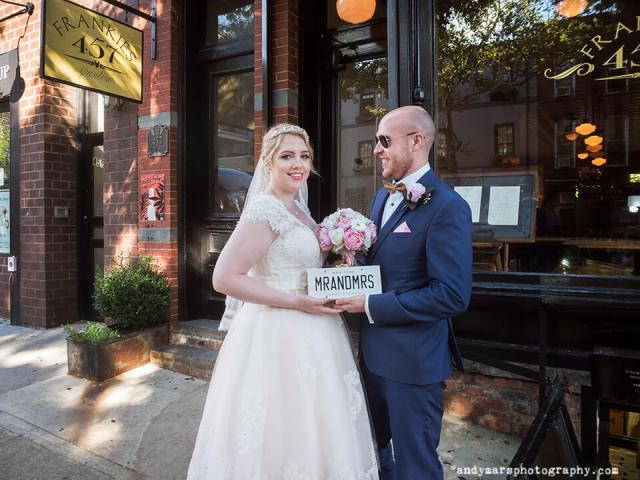 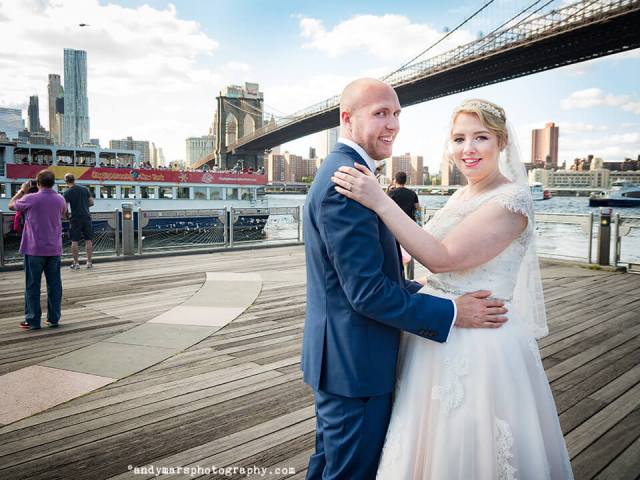