Posted on March 26, 2019 by wedincentralpark

Rochelle and Sebastian got married in the Conservatory Gardens in February. They are New Yorkers, and met during high school. Rochelle went to Sebastian’s sister’s school. They say that the first time they met was quite awkward but a memorable moment for the both of them. They had known each other for about ten years when they got married, although they had dated for far less than that, but nonetheless they were sure that they had found the on they wanted to spend the rest of their lives with.

They were living in the East 90s at the time, so they were very close to that part of Central Park. The main entrance to the Conservatory Gardens is at 105th Street and Fifth Avenue. They knew Central Park well, so it was fairly easy for them to choose their ceremony location. 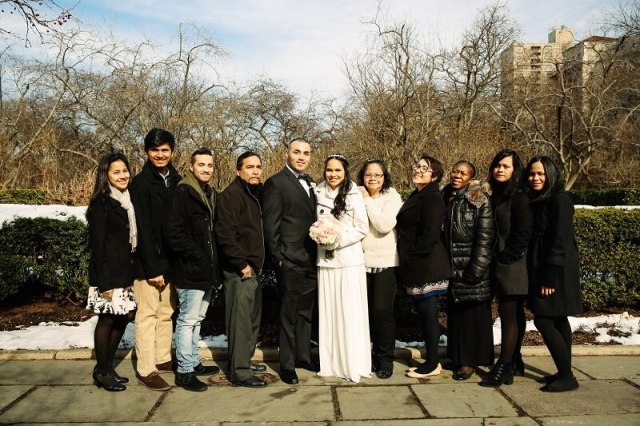 Rochelle and Sebastian got married by the Burnett Fountain in the South Garden of the Conservatory Gardens. The fountain honors the children’s author who wrote The Secret Garden, and this part of the park is quite hidden away so it is fitting. The fountain has water in it during warmer months, but not in February. This meant that the couple were able to stand inside of the fountain for some photos, next to the snow!

The Conservatory Gardens tends to be quieter than the areas in the center and south end of the park, and there are larger areas here, suitable for big groups. This is perhaps why a permit to get married her costs considerably more than a permit to get married anywhere else in Central Park, and you must apply for it through a different process that any other location in Central Park. Also, there are more time limitations on when a wedding can take place here. Rochelle and Sebastian’s group was not too big, though; around twenty guests.

It was New York in February, so of course it was cold. There were still piles snow on the ground from a recent snowfall. Rochelle wore her coat some of the time, but took it off for the ceremony, and for many of the photos.  We arranged for our florist to deliver Rochelle’s flowers to her apartment. She carried blush and cream roses. We also arranged their photographer and a videographer to record the event.

We arranged for a violinist to play at the ceremony, playing for the guests while they waited for the bride to arrive, and playing Wagner’s Bridal Chorus for her to arrive to, and Mendelssohn’s Wedding March for their exit. Then she continued to play as background music while group photographs were taken and the couple cut their wedding cake in the Conservatory Gardens.

We had three readings during the wedding ceremony. The fist was from Corinthians, chapter 13, verses 4 to 13 and the second was the poem Married Love by Kuan Tao-sheng. After they exchanged rings, the officiant read from Matthew, chapter 19, verses 4 to 6, which ends with “what therefore God has joined together, let not man separate.”