Posted on October 3, 2018 by wedincentralpark Alysha, 24 and Giovanni, 25 got married in the Wisteria Pergola in the Conservatory Gardens of Central Park this September. Alysha is from New Jersey and Giovanni is from Italy. They met in Red Bank, New Jersey three years ago. They were both out at a bar, and they met through mutual friends. “Giovanni had just moved to the US at that time, and his English wasn’t great,” Alysha told me. “We did our best to communicate, but Google Translate was a big part of our relationship at first!” she said. 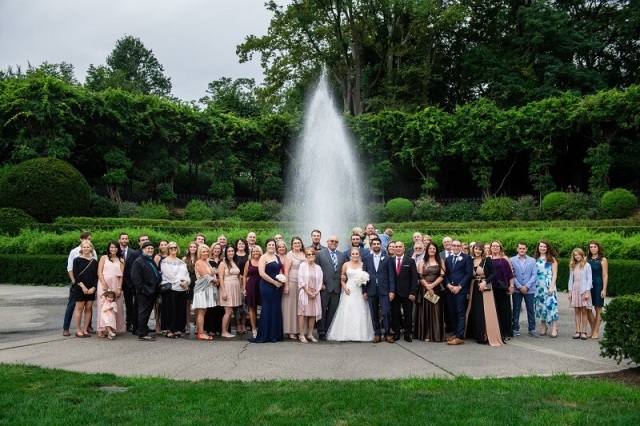 The couple got engaged in June of this year in Atlantic City, New Jersey. Alysha had thought that they were there to celebrate Giovanni’s birthday. They had dinner at their favorite restaurant, went for a walk on the beach, and on the beach Giovanni asked Alysha to marry him. 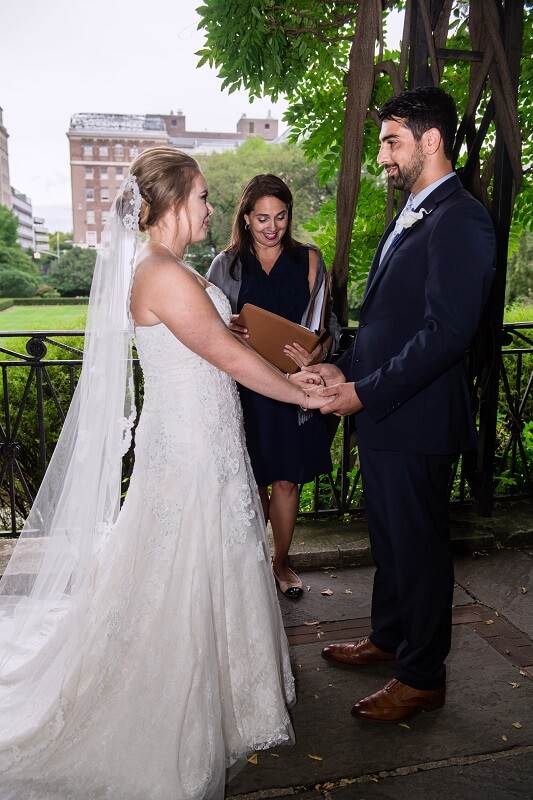 The plan was to have a large wedding in Italy. They thought maybe they would get married in 2020, so they would have the time to save up. “But as we started planning, we realized didn’t want to wait that long to be husband and wife,” Alysha explained. The couple decided to have a small wedding close to where they lived, and then a large celebration in Italy in a few years so that they can include all of Giovanni’s friends and family. “For us, we have other things we want to spend our savings on, like buying our first home together, so we couldn’t justify spending the average $30,000 on a wedding,” said Alysha. 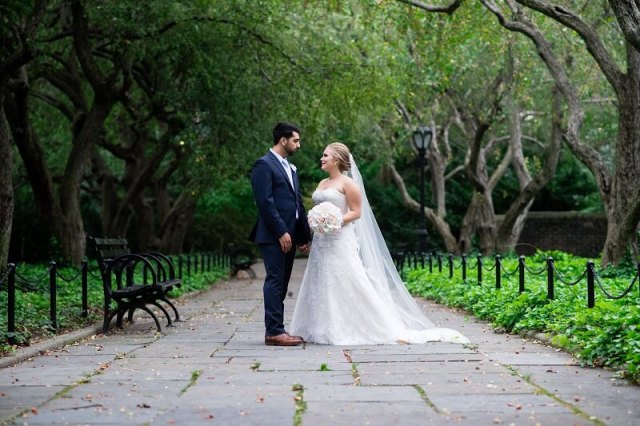 They briefly considered a City Hall wedding, but the idea of waiting in line for their turn to get married in a speedy, impersonal ceremony didn’t appeal, and Alysha came across the possibility of getting married in Central Park, and they decided that would suit them perfectly. When the couple first started dating, Giovanni was living in New York. So, New York is a big part of their story. “I’ve always been amazed by Central Park,” said Alysha. “It’s one of my favorite places to take Giovanni’s friends and family when they visit us from Italy,” she added. 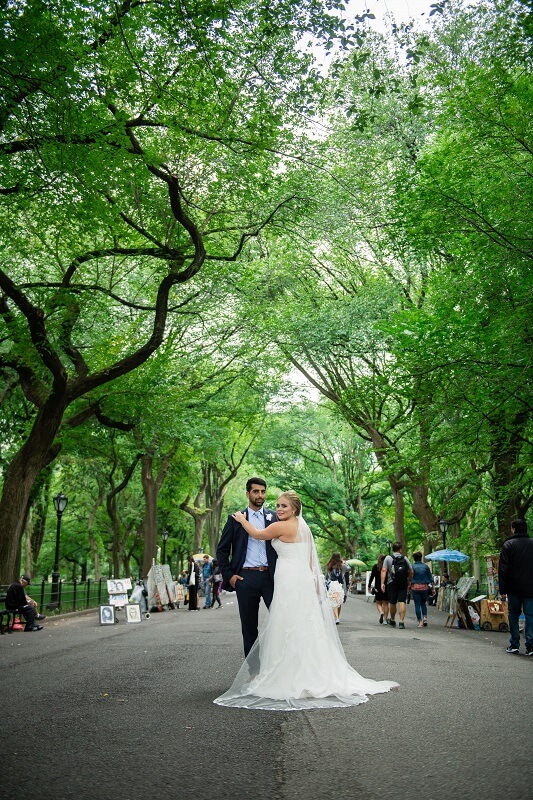 I asked them if they had any regrets about not having a “traditional” wedding, and Alysha said, “no, our wedding turned out better than we could have ever dreamed it would be!” Their wedding was not without its hiccups, though. There was a Labor Day parade that shut down some streets around their hotel, the Grand Hyatt by Grand Central. So, they had to delay the ceremony a little so that Giovanni’s family and the best man could arrive, and one of Alysha’s cousins who had traveled from Florida missed the ceremony because of the road closures. 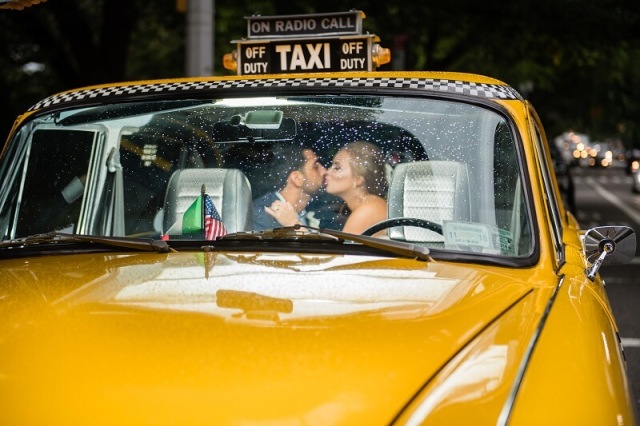 The couple had originally chosen Cop Cot for their ceremony location, but it wasn’t available when we applied for a permit with just a little over two months’ notice before the wedding. They went over to Central Park and had a look around and decided that they wanted to get married in the Conservatory Gardens. Every other location in Central Park has an event permit fee of $25, but the Conservatory Gardens has a fee of $500 in total, but Alysha and Giovanni knew that the Wisteria Pergola in the Conservatory Gardens was the place they wanted to say “I do”. “It was absolutely beautiful there,” said Alysha. “Our best photos are from that area. It’s much more quiet, and beautifully maintained. I certainly recommend paying extra for a permit to have this beautiful location!” she added. 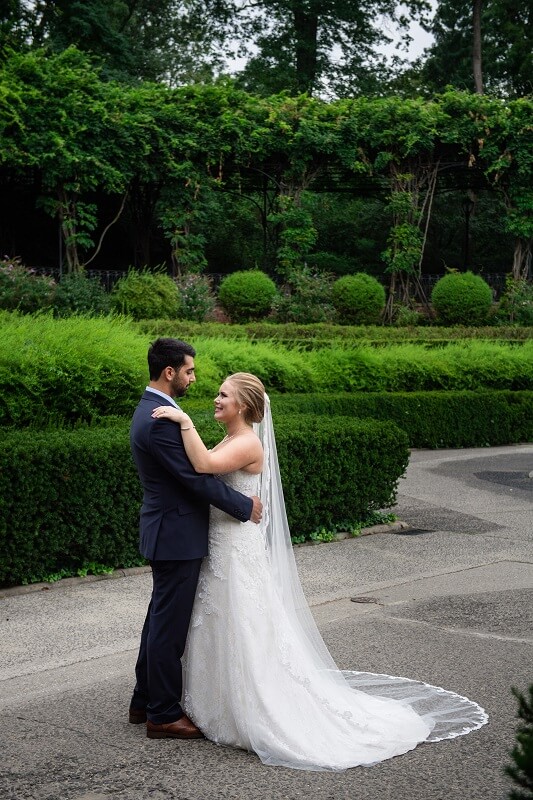 We had our cellist play some pieces by Elvis, Ed Sheeran, John Legend and Taylor Swift to add to the ambience. And of course he played the Wedding March for Alysha to arrive to. There were around fifty guests in attendance. “Our guests traveled by plane, train, car, boat, and party bus to get to Central Park,” said Alysha. “After the wedding, several people told me that at first they didn’t understand why we chose Central Park, but after seeing how beautiful the Conservatory Gardens are, they said that it made perfect sense to them,” she added. 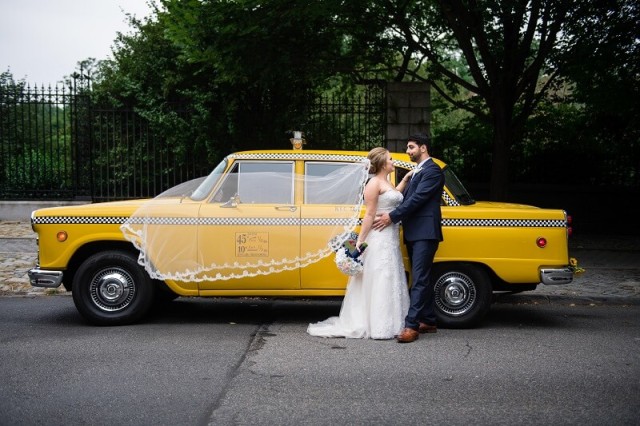 They had a vintage checker cab to take Alysha to Central Park from the hotel, and take the couple and their photographer, Jakub Redziniak to other areas of Central Park for photographs, then on to their reception afterward. “The car turned heads,” said Alysha, “and some of our favorite photos are with the checker cab!” she added. So, she highly recommends Peter at Film Cars. 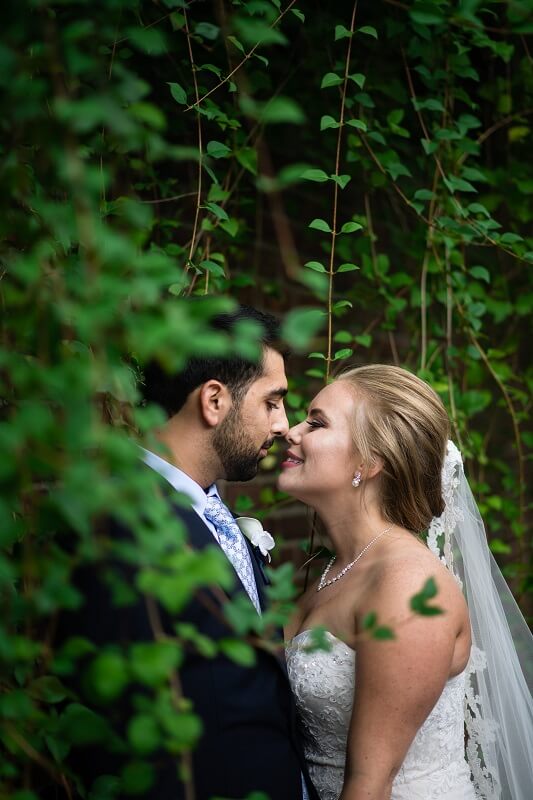 Alysha’s gown was purchased from David’s Bridal. She carried a silk bouquet made of roses, hydrangeas, and calla lilies. She had her hair and makeup done at L’Envie salon in Midtown Manhattan. After the ceremony, the couple’s guests went to a bar in Kipp’s Bay which the couple stayed on in Central Park, taking some more photographs. Then, they went on to meet their guests at that bar for a few drinks, before going on to their reception location. “We had our dinner in the private room at Patrizia’s of Manhattan,” said Alysha. An Italian restaurant, of course. “It’s one of our favorite restaurants!” she said, “the guests were absolutely amazed by the food, they are still talking about it!” she added. 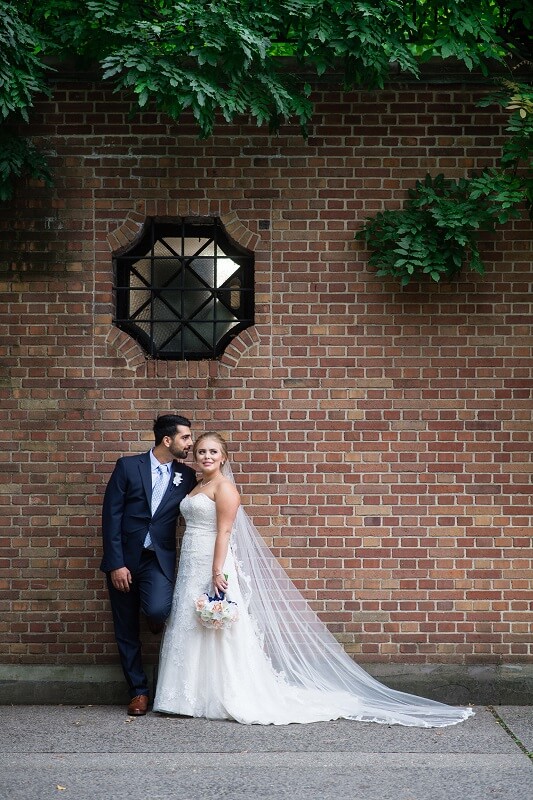 Alysha had some points to share about a wedding in Central Park not being for everyone that I think are excellent ones. “While I think getting married in Central Park was perfect for us, I don’t think it is for everyone. For a laid-back bride, it is perfect, but for someone who wants to control and plan every detail, I would not recommend it. Unavoidable things like parades and road closures, a New York Fashion Week show closing down the area around Bethesda Fountain, and of course unpredictable weather make it hard to know exactly what to expect!” Alysha told me. She raises good points about the perils of marrying in a public park, although of course road closures would affect travel to any ceremony location. She also mentions that there were strangers in some of their photos. It is a condition of the event permit that the area you marry in must remain a right of way, but of course when people are asked to move on they usually respect a wedding and will do as they are asked. 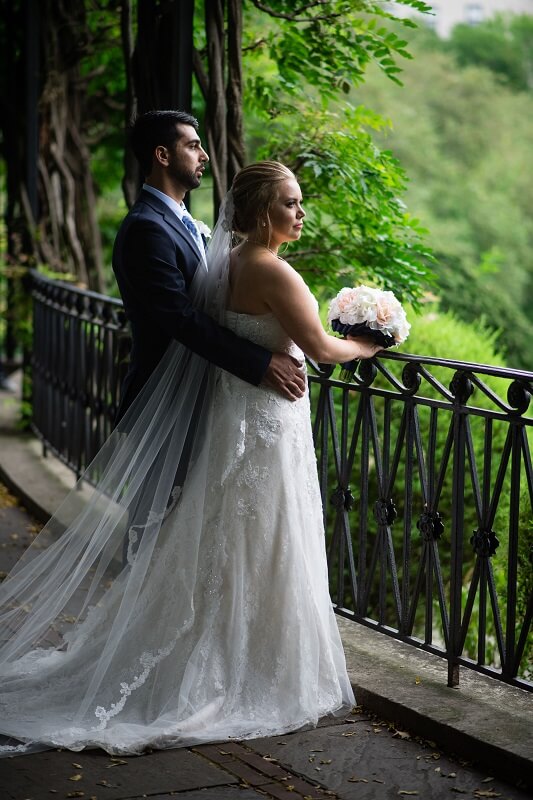 I asked Alysha how she felt planning a wedding with Wed in Central Park in just two months had gone. “Claire was a pleasure to work with!” she said. And so was Alysha! “She is so quick to respond, and the vendors she works with are the most professional! Planning a wedding in two months would not have been possible without Wed in Central Park!” I must admit, I do love a last-minute wedding! Thanks for sharing your story with us, Alysha and Giovanni, we wish you lots of luck for your future together! If you would like me to help you with planning your own Central Park wedding, either for a fairly last minute wedding like this one, or for one years in advance, visit our website, or “like” us on Facebook, follow us on Instagram and follow us on Pinterest where we pin all things New York or wedding-related. 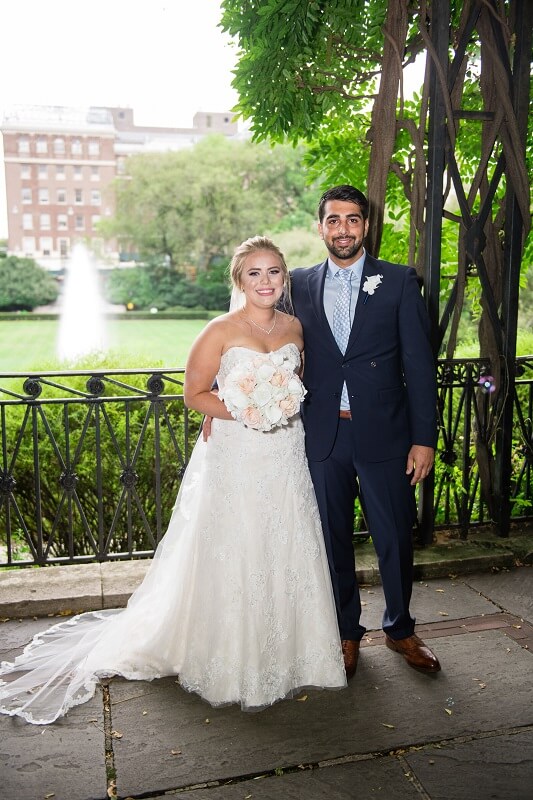