Posted on October 19, 2012 by wedincentralpark

I run a Central Park wedding planning business.  A big concern for lots of couples, particularly those who are not from the area is what the weather will be like. Anyone who wants to get married in the great outdoors, enjoying all nature has to offer, is at the mercy of the weather.

Spring comes quite suddenly in Manhattan. March can be quite cold, then at some point in April it quickly warms up. Daffodils tend to come up in March, but can often still be there in April. The average highest temperature (usually recorded around 3pm) in March is a chilly 10C 50F, but by May this is a very comfortable 22C 71F. The tulips come up in May. Of course some years are warmer than others, and if you plan to marry in March, you could have a very warm day that feels like summer, or it could still be very cold. The weather, of course, affects when the blossoms come, and that can provide a lovely background to a photograph, the cherry tress tend to blossom in April. April is one of Manhattan’s rainier months, but not significantly so. We see a few rainy days in Spring, but the majority of showers passing over the area tend to have run out by the time they get to the City. The sun sets between 6 and 7pm during the Spring. 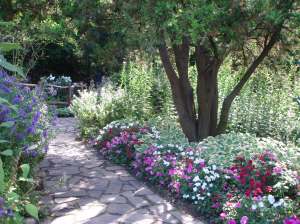 Summer days can get very hot in New York City. Average highest temperatures are around 26-30C 78-85F from June to August. Some days in August get as hot as 40C 105F, which, along with the humidity, can be pretty uncomfortable. Manhattan is an island, though, and a stroll along one of the rivers will cool you down. Because of it’s trees and greenery, the coolest place in the City on a hot day is Central Park. There are expanses of cooling water, shaded groves and walkways, and some lovely shelters to keep the sun off. The Shakespeare Garden looks particularly beautiful in the Summer, because this is when many of its flowers bloom. July and August can bring rainstorms, but they tend to pass quickly, and those hitting the area have often run out before they get to Manhattan. If you wanted to wait until the day is cooler then a sunset wedding would be between around 7pm and 7:30. You will see more butterflies in the Park towards the end of the summer, because that is when the plants that attract them are blooming.

September usually stays very warm and pleasant, average high temperatures are 24C 75F in the day, and the storms of high summer are over. Roses are still blooming in September. By November the average highest temperature 12C 54F so getting quite chilly by then. The sun sets at around 6pm in September but by November it is setting at around 4:30, and that it when it gets cold, so you may want to have ceremony and photographs finished with before then. Many people love the Park in the Fall because of the colors of the trees. They start to change in September, but may still be falling from the trees and being crunchy underfoot into November. 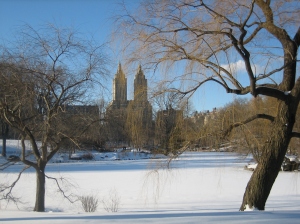 January and February see the lowest amount of precipitation (in the form of rain or snow) of the year. This leads to very beautiful blue skies and crisp, cold air. However, when it does snow, Central Park looks amazing, until it all starts to melt, and then puddles are not so photogenic. Average temperatures during the day are 5C 40F, but it can get extremely cold. The sun sets between 4:30 and 5:30 in the Winter, and that is when the temperature starts to drop. Record lows are well below freezing, but of course these are recorded during the night.

For more details on the facts and figures on the weather in Central Park check the table on my Central Park wedding planning website. I am happy to provide more information and guidance on when would be a good time of year for you if you email me. Central Park is a truly magical place and beautiful all through the year in many different ways, you will just have to decide on which time of year suits you better.

9 Responses to Weather in Central Park