Posted on October 17, 2012 by wedincentralpark

Kathryn and Gareth are from Lancashire in England. They met at a local club and had been together for ten years before they got married. Gareth asked Kathryn to marry him on her birthday in December of 2009, and of course she said yes.

Kathryn and Gareth both agreed that they wanted a small wedding. They did not want to spend a lot of money and were not interested in having a conventional wedding reception. They discussed several options, such as the UK’s traditional elopement spot of Gretna Green, just over the Scottish border, but that doesn’t offer the most exciting places to celebrate in, nor the best weather. They also considered lovely Venice, and several small locations closer to home but couldn’t find a location that they both really wanted to marry in.

In the end they both agreed that they wanted to get married in New York. Kathryn and Gareth had been planning to go for Kathryn’s 30th birthday, but once they started to discuss getting married there it felt like the right location for them. They chose Central Park because it is such an iconic New York landmark and there are so many fantastic locations within the park for beautiful photos. And you can see from their photos that they made the most of them. 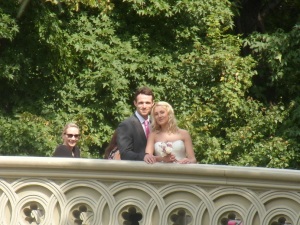 Gareth’s parents and his two sisters and brother, along with their partners were their guests. All their guests had been thrilled to attend a wedding in Central Park. They chose Wagner Cove for their ceremony locations because it suited their small wedding and the surrounding scenery is beautiful. 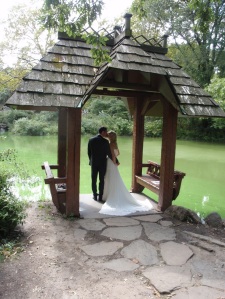 Their main concern about getting married in New York was getting the marriage license, but as that was taken care of within less than half an hour on their first morning of arrival in New York, so there had been no need to worry. I explain how to get your marriage license from the City Clerk’s Office here. Because they weren’t familiar with New York, they had some concerns about where they would go to celebrate after the ceremony, but as Kathryn said “with an almost limitless number of options available to us we needn’t have worried.”

Kathryn looked stunning in a long fitted ivory wedding dress with small diamante and pearl detail in the central off the dress. Gareth wore a grey suit with pink tie to match Kathryn’s white rose and pink bouquet. Before coming to New York, Kathryn had some makeup tutorials, so she was confident that she could apply her own makeup on the day. Gareth’s sister styled Kathryn’s hair on the day, again, after much practice back in England.

After the ceremony they ate a light lunch and had a celebratory drink in restaurant and wine bar Sambuca on West 72nd Street which Kathryn said was in easy walking distance from Wagner’s Cove “even wearing a wedding dress!”. They had their evening meal at Scalletta restaurant on West 77th Street, which they chose because it was close to their hotel on the Upper West side, and they said it was fantastic.

Kathryn admits that getting married in New York is far from the traditional wedding, she said she was “slightly worried about walking through Central Park wearing a wedding dress, but everyone is so complimentary and was congratulating us as we walked by, it was fantastic!” You can see the passers by taking some photographs of the lovely couple in some of the photos.

When asked for  summary of how she thought things went, Kathryn said, “Claire, thank you for everything, we had the most amazing day, we couldn’t have wished for a more perfect day and definitely couldn’t have done it without your help”. Thank you, Kathryn and Gareth, for sharing your story with us. And thanks to their guests, who took these amazing photographs.