Posted on November 18, 2019 by wedincentralpark

Adam and Kirsty brought around twenty of their friends and family over to New York from their home in Glasgow, Scotland for their wedding in Central Park in September. They met during their second week at university in 2009. They had been together for almost ten years when they got married. They had a reception with wider friends and family on their return to the UK, and that was held on their ten year anniversary.

Adam proposed to Kirsty in Central Park three years ago, not far from where they would eventually be married. “It was a relaxed proposal during a picnic with her sister Laura and Laura’s wife Isla on a sunny May afternoon,” Adam told me. “We actually chose to marry in Central Park because that’s where we were engaged,” he said. 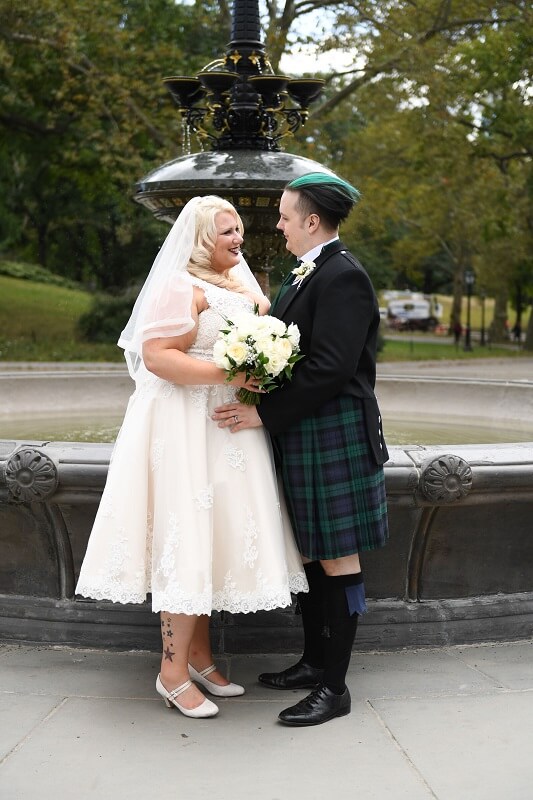 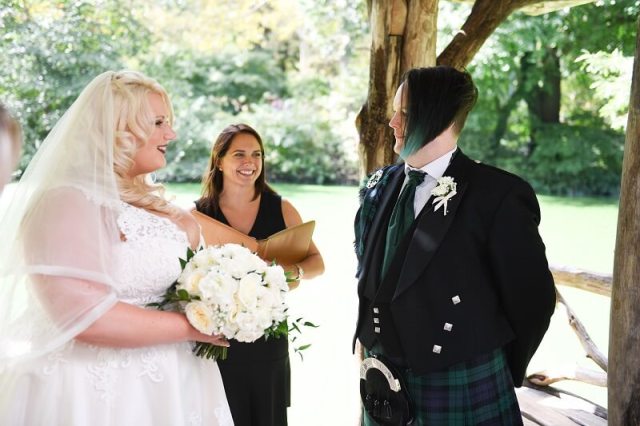 This was Adam and Kirsty’s third trip to New York, and the second time they stayed in an Airbnb, which they totally recommend, “it lets you feel like part of the city and not just another tourist,” said Adam. I am in firm agreement, I think Airbnb is a great option for staying in New York. Couples can rent a whole place for some privacy, or guests looking to keep the budget down can rent just a room in someone’s place. The beauty of Airbnb in New York is that you can often stay in an apartment on the same block as a hotel – you’re not necessarily getting the out of town option by staying where real locals live. Adam and Kirsty stayed for ten days with the wedding right in the middle, “so we had time either side to relax and be on holiday,” Adam told me. 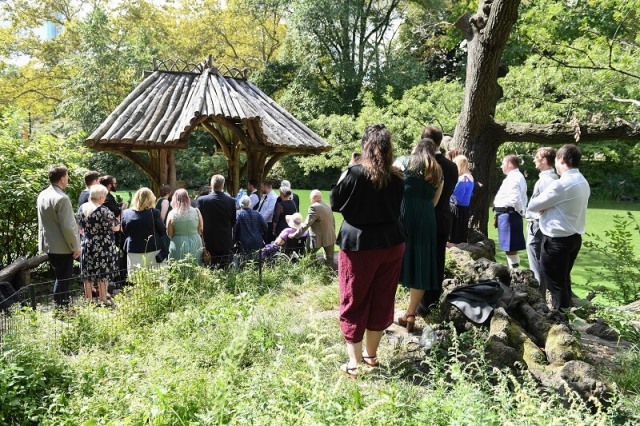 I asked where their favorite photos were taken, “we were married in Wagner Cove by the water and most of the best pictures came from there, or in front of the Cherry Hill fountain nearby!” Adam said. “We liked the simplicity and intimacy of the Cove, even the green-tinged water matched our wedding colour scheme!” he added. They also loved the fabulous shots they got in Times Square. 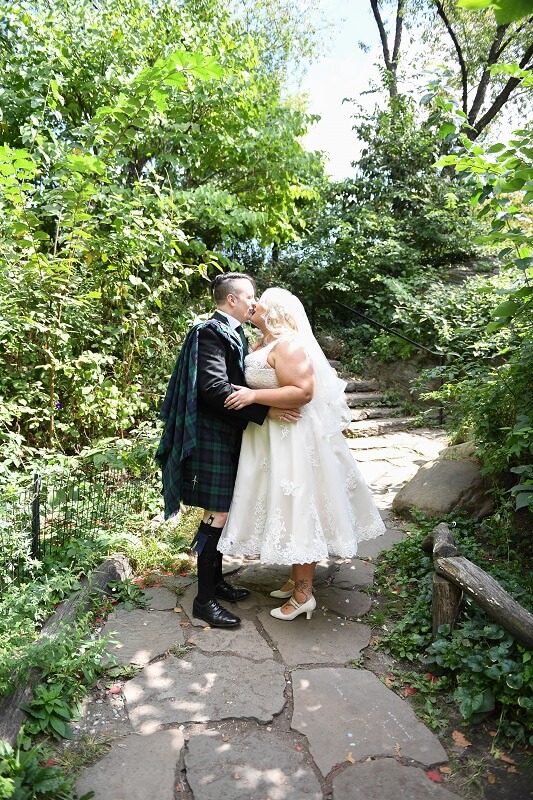 We wrote the ceremony together, we had an introduction about the couple’s relationship so far, we thanked their guests for all they had done and we had the reading How Falling in Love is like Owning a Dog, by Taylor Mali, which I’l put at the end of this post. “The ceremony was beautiful and simple,” said Adam. “We kept our vows lighthearted and to the point. She agreed to live with my weirdness, I agreed to remove all the house spiders,” he said. 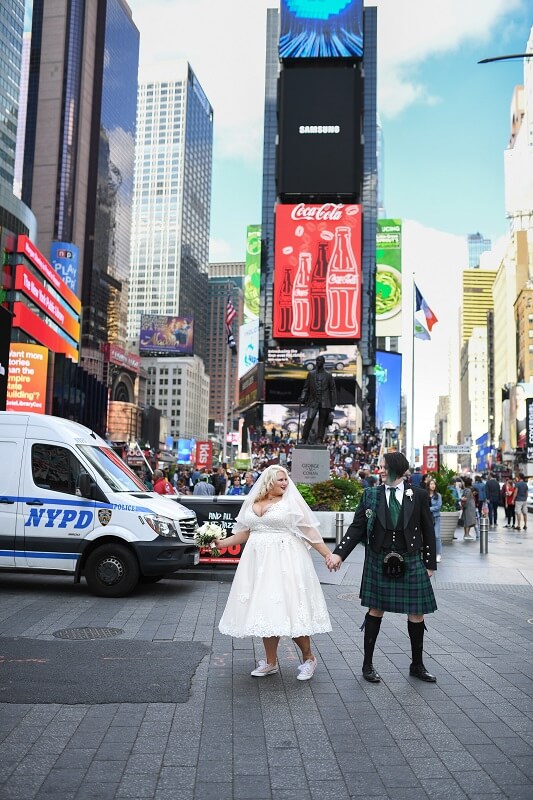 Adam and Kirsty had just over twenty guests at their wedding; a mix of close friends and immediate family, a group size perfect for Wagner Cove. “Everyone was pretty excited about attending a wedding in New York, and they all said that they loved the ceremony location we chose,” said Adam.

We had a guitarist play for the guests while they waited for the bride to arrive, and she walked down the steps to Wagner Cove to Can’t Help Falling in Love by Elvis. After they were pronounced married, the couple had their first dance to Still Into You by Paramore, and then he went back to playing background music while they signed the license and took group photos in the area.

Kirsty wore a tea-length, champagne wedding dress purchased from Wed2B in Glasgow. She wore heels for some of the day and custom Converse for the rest, which made all the walking they were doing much easier on her feet. Adam wore a full kilt with Blackwatch tartan and plaid half cape. Kirsty carried a bouquet of cream roses and we arranged matching buttonholes for the groom and the best men.

They took photos around Central Park, then on the Grand Central and after that, Times Square with their photographer Jakub Redziniak. They booked a corner of the Monarch rooftop bar and had food and drinks with the wedding party there, and apparently some excited locals! They had a small wedding cake made and delivered by Magnolia Bakery, which they said was amazing, and they partied there until the wee hours!

I asked how we did. “Claire and her team do an amazing job of coming together to craft a fantastic wedding day,” said Adam. “Communication was always on point and every little question would be answered and addressed,” he said. It was a pleasure to plan your wedding with you, Adam, and it’s rare that most of my communications are with the groom for straight weddings. 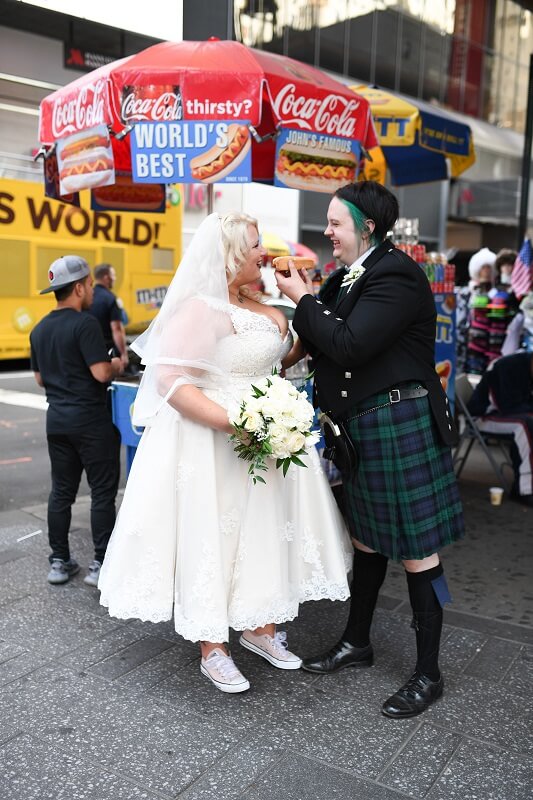 How Falling in Love is like Owning a Dog, by Taylor Mali

First of all, it’s a big responsibility,
especially in a city like New York.
So think long and hard before deciding on love.
On the other hand, love gives you a sense of security:
when you’re walking down the street late at night
and you have a leash on love
ain’t no one going to mess with you.
Because crooks and muggers think love is unpredictable.
Who knows what love could do in its own defense?
On cold winter nights, love is warm.
It lies between you and lives and breathes
and makes funny noises.
Love wakes you up all hours of the night with its needs.
It needs to be fed so it will grow and stay healthy.
Love doesn’t like being left alone for long.
But come home and love is always happy to see you.
It may break a few things accidentally in its passion for life,
but you can never be mad at love for long.
Is love good all the time? No! No!
Love can be bad. Bad, love, bad! Very bad love.
Love makes messes.
Love leaves you little surprises here and there.
Love needs lots of cleaning up after.
Sometimes you just want to get love fixed.
Sometimes you want to roll up a piece of newspaper
and swat love on the nose,
not so much to cause pain,
just to let love know Don’t you ever do that again!
Sometimes love just wants to go out for a nice long walk.
Because love loves exercise. It will run you around the block
and leave you panting, breathless. Pull you in different directions
at once, or wind itself around and around you
until you’re all wound up and you cannot move.
But love makes you meet people wherever you go.
People who have nothing in common but love
stop and talk to each other on the street.
Throw things away and love will bring them back,
again, and again, and again.
But most of all, love needs love, lots of it.
And in return, love loves you and never stops. 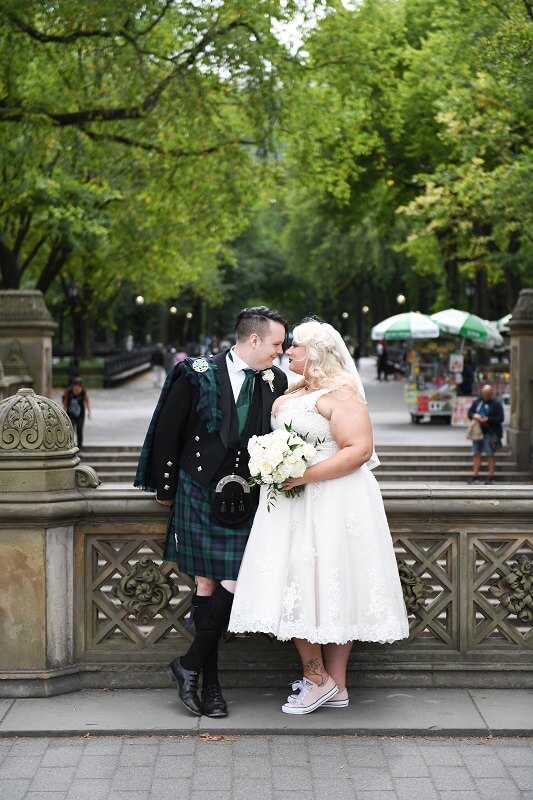