Sarah and Richard’s Wedding in the Ladies’ Pavilion in August

Posted on April 20, 2020 by wedincentralpark Sarah and Richard got married in the Ladies’ Pavilion in August.  They were a party of fifteen in total, all over from the UK.  They had been together for three years when they got married in Central Park.  They had got engaged on a previous trip to New York for New Year’s Eve.

Sarah and her dad arrived at Central Park in a vintage cab.  Drop me an email if you’d like further information and prices if you’d like to do the same. 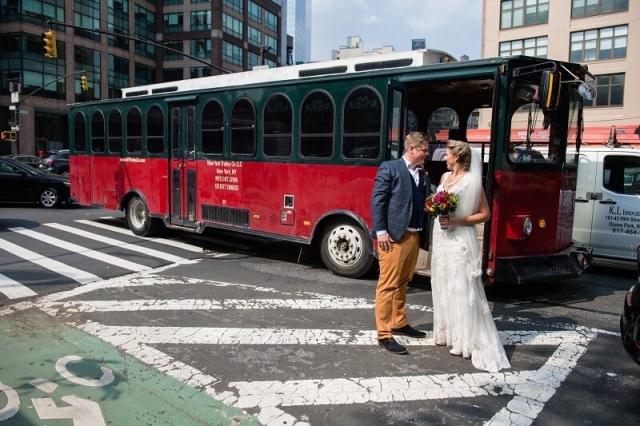 They had our photographer Jakub Redziniak with them for a total of four hours.  It was a bit of an unconventional job for us, but we made it work.  Sarah and Richard wanted photos of the ceremony with their guests, and then the guests left and the couple went for and photos around Central Park, just the two of them.

After taking photos in Central Park, they joined their guests on the vintage trolley bus and everyone went for lunch at the David Burke Kitchen in Soho.  During this time the photographer took a break.  We wouldn’t usually do this, we would usually bill from the start of the job until the end of the job, but in this case the photographer agreed to take an unpaid break while the group had their lunch.

After lunch, they started up again with photos.  The evening reception was at Sugarcane in Dumbo, so Sarah and Richard had photos taken at Jane’s Carousel and with the Brooklyn Bridge and Manhattan in the background, and then at the reception location.  I’m so glad we were able to make this work because all the photo locations are lovely and the couple got a great lasting memory of the major parts of their day.

Their evening reception was at Sugarcane, on Water Street in Dumbo, and is within the new Empire Stores building.  The outdoor patio looks out onto Jane’s Carousel, they enjoyed drinks outside, prior to canapes being served later on with drinking into the night while enjoying the view.

Sarah and Richard stayed at the Intercontinental New York Barclay Hotel on East 48th Street.  Their hotel was in Midtown, and right next to Grand Central station.

I asked them how we did.  “We were very happy with the day and the planning, which helped us tick off some of the formalities but gave us the flexibility to plan the other parts separately which worked well for us,” Richard said.  “Everyone involved was great and the photos we have received are lovely, so we are pleased with the people you put in place for us,” he added.

After their wedding, the couple had a minimoon in Toronto followed later on by a longer honeymoon to Australia and New Zealand.