Christine and Alwyn’s August Wedding in the Ladies’ Pavilion

Posted on November 5, 2019 by wedincentralpark

Christine and Alwyn got married in the Ladies’ Pavilion in August.  They met online through Eharmony.  Alwyn was Christine’s first and only online date!  She was on the app less than forty-eight hours when she first spoke to him.  They had been together for a year and a half when they got married.

They got engaged in the Loeb Boathouse in Central Park in January.  “We wanted to be married because we love one another and want to share our lives together as man and wife,” said Christine.  “We believe marriage is the ultimate commitment and it’s what we are called to do in our faith,” she added. 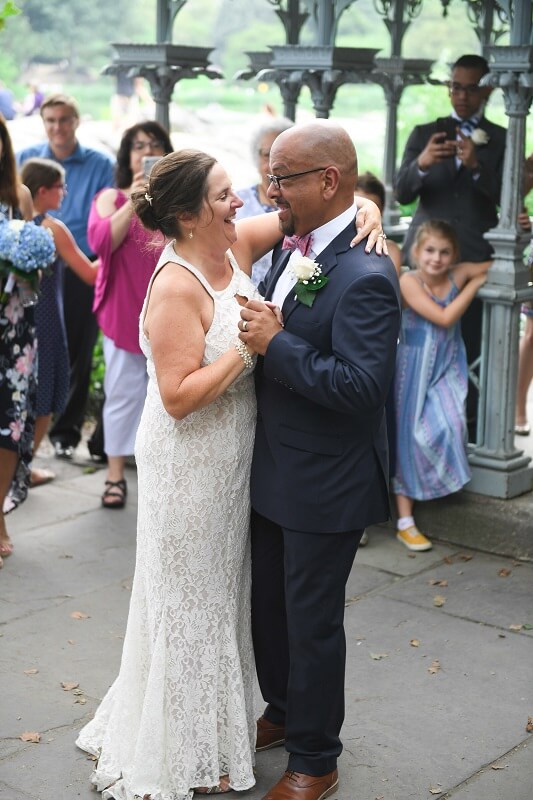 When they first got engaged they did consider getting married at home – “for about five minutes we considered getting married closer to home,” Christine told me.  “We decided that a wedding in New York would be a fun and exciting shared experience with our guests,” she said.  “We wanted a smaller, intimate wedding so a destination wedding worked for us.  We think that couples need to be mindful of the expense for themselves and their guests,” Christine said.

I asked if the couple had any regrets about not having a “traditional” wedding closer to home?  “No!!” said Christine.  “Our wedding was a memorable and unique event. We loved sharing the city with our family and friends.”

I asked if they’d had any worries about getting married in New York.  “One concern was for our guests finding their way around and getting transportation,” Christine said.  “We also had to trust that the hotel, reception venue and other vendors met our expectations,” she explained.  “When planning a destination wedding you have to put a lot of faith in your vendors to follow through with the services.  There is some risk involved,” she added.  This is an excellent point, and that’s part of why I write this blog – to reassure couples that we’re a genuine business who will deliver the wedding they want. 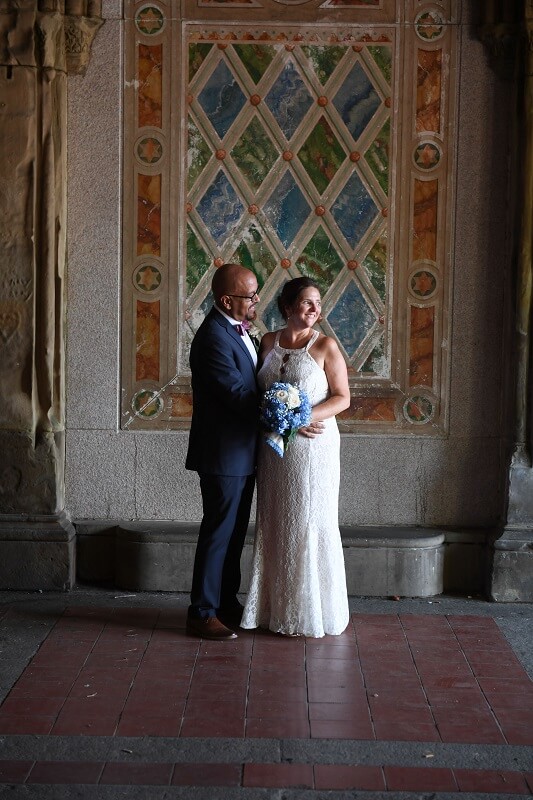 The couple arrived in town on Thursday, married on Saturday and left on Sunday.  They stayed in the Crowne Plaza on Times Square.  They took around a dozen of their guests on a bus tour of the city on Friday during the day time and on Friday night they went to Don’t Tell Mama Piano Bar for dinner and drinks.  “It was a fun opportunity for our guests to get to know each other better, said Christine.  This is a big plus of a destination wedding – all of the guests really have the time to get to know each other.

The ceremony was led by our New York State registered officiant hand in hand with their friend who is a minister at Christine and Alwyn’s church.  This meant that we were able to keep the ceremony personal to the couple, while making sure that it was legally binding, too.

“The ceremony was personal for us because we had a friend who works in ministry at our church lead it,” said Christine.  “We worked with her and Claire to develop our ceremony including a bible passage, a reading from Paul Coehlo’s The Alchemist and our own fun vows,” she said.  I’ll put that piece from The Alchemist at the end of the post.

Christine and Alwyn had twenty six guests travel from a few different states to attend the ceremony.  “Everyone was very excited to attend,” Christine told me.  “We also posted the wedding on Facebook Live for family that was unable to attend,” she said.  Alwyn booked a violinist that he had found through the Juilliard school, so their first dance was outside of the Pavilion to her music.

Alwyn wore a blue suit and bow tie.  Christine wore a long, champagne colored halter dress purchased from David’s Bridal.  Christine had her hair done at West Vibe Salon.  They bought blue hydrangeas and white roses from a street vendor and a friend created the bridal bouquet, including an old handkerchief from Christine’s family.

I asked her how we did.  “We were very appreciative of the assistance we received from Claire.  For a person whom we never met, she played a large role in our wedding day being successful.  We felt confident that our officiant and photographer would be there and do a great job.  We also asked a lot of questions about the park and the city!”

I asked Christine whether she would recommend getting married in Central Park to others.  “Getting married in Central Park is a unique and special experience,” she said.  “There are many people around so there will be onlookers, strangers taking your picture and congratulating you.  It’s public and unpredictable,” she said.  I couldn’t agree more.  I’ve been to lots of weddings in Central Park and the couple truly see what it’s like to live like a celebrity for the day!  “We had a small concert happening nearby which added to the fun and the vibrancy of a Central Park wedding,” Christine said.  “We would not change a thing!” 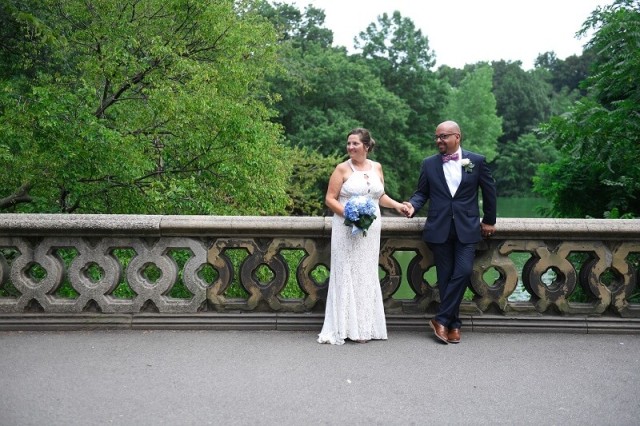 The Alchemist by Paulo Coehlo

“When he looked into her eyes, he learned the most important part of the language that all the world spoke — the language that everyone on earth was capable of understanding in their heart. It was love. Something older than humanity, more ancient than the desert. What the boy felt at that moment was that he was in the presence of the only woman in his life, and that, with no need for words, she recognized the same thing. Because when you know the language, it’s easy to understand that someone in the world awaits you, whether it’s in the middle of the desert or in some great city. And when two such people encounter each other, the past and the future become unimportant. There is only that moment, and the incredible certainty that everything under the sun has been written by one hand only. It is the hand that evokes love, and creates a twin soul for every person in the world. Without such love, one’s dreams would have no meaning.”