Emily and Casey’s Destination Wedding in the Ladies’ Pavilion

Posted on September 22, 2019 by wedincentralpark Emily and Casey, both 24, are from a small town just outside of Manchester in England. They met in high school and have been together since the age of thirteen so they have certainly had a lot of time to discuss their wedding plans! They brought their close friends and family over to New York for their wedding in the Ladies’ Pavilion in July. 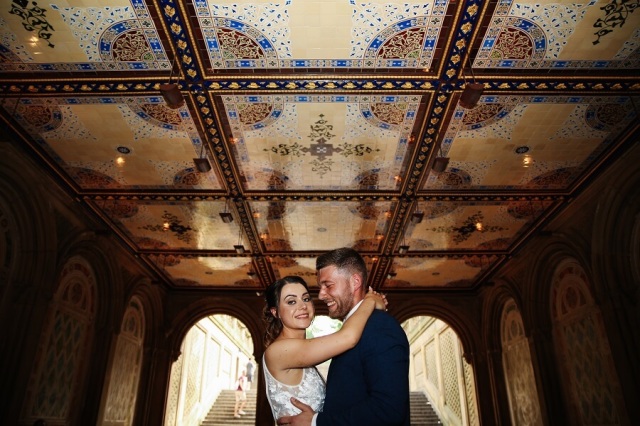 They knew they wanted something a bit different for their wedding, and they knew they wanted to get married abroad, so when they started seriously looking for a wedding location, they knew that New York would be perfect for them. They first visited New York in January 2017, “this is when we fell in love with the city, especially the food!” said Emily. They got engaged the summer after that while on holiday in France. Emily is a teacher so she is restricted as to when she could travel, so they decided to get married in the summer holidays of this year. So, they were only engaged for eleven months. “This meant that we needed a relatively fast turnaround on organizing everything, which I think would have been much more difficult had we decided to get married in the UK,” explained Emily.

As soon as they got engaged they started to discuss the location for the wedding after ruling the UK out. “Casey had always wanted to travel the west coast of America and we both wanted to go back to New York as part of our honeymoon,” said Emily. “So he came up with the idea of a small wedding in Central Park and then travelling straight on to our honeymoon on the west coast,” she explained. “When I found out this was actually a thing and there were wedding planners who solely organize this I was so happy!” she said.

Emily and Casey chose the Ladies’ Pavilion for their ceremony location because they felt it would be the perfect size for their party of fifteen, and they liked the backdrop of the lake behind the Pavilion. Their guests were their parents, siblings and a few friends, “we initially had concerns about asking people to come all that way knowing it was expensive but neither of our parents had been and we are passionate that New York is a place everyone must visit at least once so they were fine with it!” Emily told me. “We advised everyone to just stay wherever best fit their budget and didn’t find it a problem that we were in different hotels, it was nice that everyone could still do their own thing on other days and see the sights without being on top of each other,” she added.

Emily found the Wed in Central Park website, along with a few other wedding planners who are similar to me. “After getting a few quotes off different wedding planners, I found that Claire’s deals were the simplest, and I didn’t want a lot of the extras some of the other companies offered, we wanted to keep the budget down on unnecessary things so we could spend money on drinks etc for everyone who had made the effort to come,” she explained. I do try to keep things as simple as possible, despite having added two extra packages to our offering this year – we can generally keep things as simple as couples like, or have plenty of extra services and have lots of people involved if they prefer – we’re flexible!

“In the end Claire organised the ceremony, photographer, a musician and the officiant to perform the ceremony,” she said. “I decided to organize my own hair and makeup as I found it a bit cheaper online – it is a lot more expensive in NYC compared to Manchester – and someone came to my hotel on the morning and did it in my room,” she added. For the flowers, they went down to City Hall on the morning of the wedding and got the bridal bouquet and groom’s button hole from the flower man who has a stall set selling to couples who get married there. “I think my bouquet was $45 which I was very pleased with!” she said. 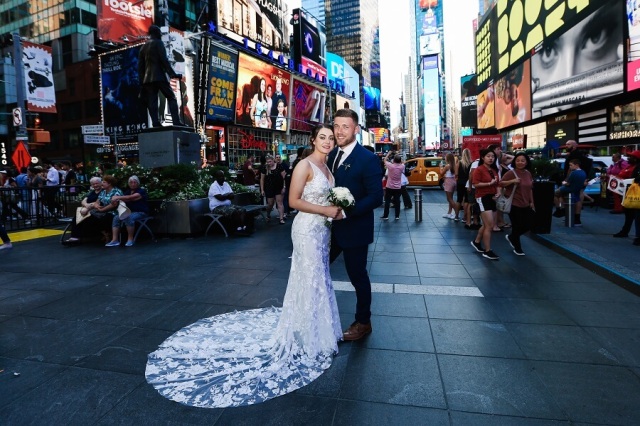 Our guitarist sang some requests for the guests while they waited for the bride to arrive, then she walked down the pathway to the Pavilion to How Would you Feel by Ed Sheeran. Then he played Paradise by George Ezra after they were pronounced married, and then went back to playing background music while they took some group photos around the Pavilion and signed the license.

Emily and Casey stayed in Park Lane Hotel, “it was lovely and was around a ten minute drive from the entrance to the park we used on the day,” Emily said. “When I told the hotel about the wedding when we checked in they upgraded us to a suite which had the most amazing view of the park I have seen!” she said. So, keep that in mind – it’s always worth telling the staff in your hotel you’re in town to get married!

Emily hailed a cab to take her to the park for the wedding. She wasn’t too bothered about hiring a fancy car to take her there, since nobody would see her arriving at the park. Instead they decided to hire the ever popular vintage trolley bus to pick up the whole party after the ceremony and photos in the park. After the ceremony the guests went for a drink at the Tavern on the Green while the couple took photos around the park, “this was lots of fun as we got a lot of attention from tourists,” she said. Then they all got in the trolley bus, where they are allowed to take their own alcohol and play their own music, and the driver will take them wherever they want in the allotted time. They all went to Times Square and Brooklyn Bridge Park to take photos, before dropping them off at TESSA – the restaurant they had chosen for their wedding meal. “Our time on the bus was by far the best part of the day,” said Emily, “admittedly everyone drank a bit too much and the amazing meal was probably a waste of money, but the driver was so laid back and stopped twice for toilet breaks and too collect more drinks! We had so much fun and got some amazing photos around the city,” she said. 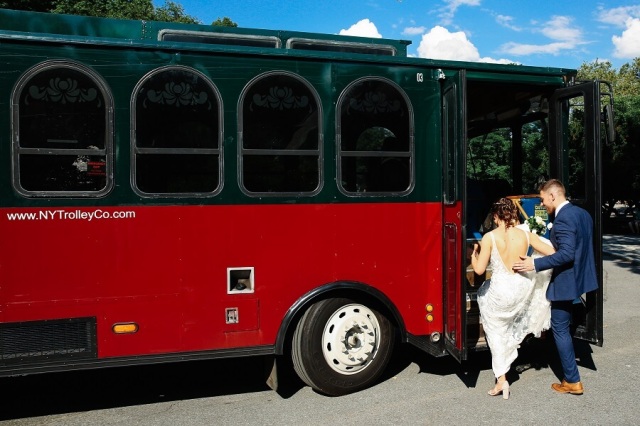 Following the wedding Emily and Casey had one more full day with their families in New York before jetting off to San Francisco where they spent three nights. Then they hired a car and drove to Yosemite National Park and spent a couple of days there before travelling down the west coast making stops at Monterey, Pismo beach, Santa Barbara and LA. From LA they drove to Vegas and finished off the honeymoon there. In total they were in the USA for three weeks, five days of that was spent in New York. “It was a once in a lifetime trip and we managed to do the wedding and all that traveling for much less than the average cost of a wedding in the UK,” said Emily. 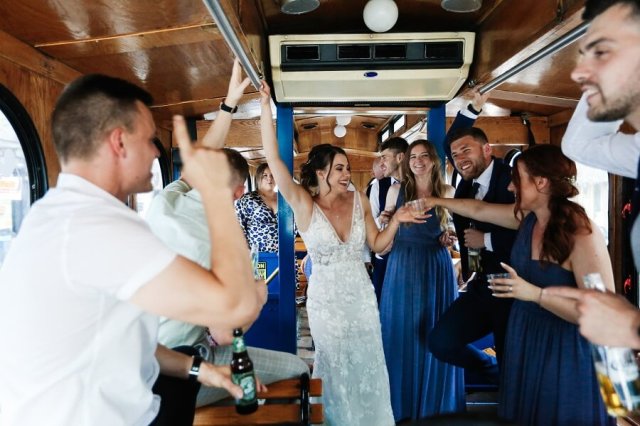 On their return to the UK Emily and Casey threw a wedding reception at the local golf club with the rest of their family and friends, “we put on a buffet and had a proper wedding cake which we never had in New York,” Emily told me. “Everyone wore their outfits again, so I got another chance to wear my dress! We also had our speeches and a proper first dance as we never got the chance to do this on the day, and we had a big screen showing the pictures from the big day,” she added. This is a really nice way to ensure everyone is still included in the celebrations and also keep the cost down. 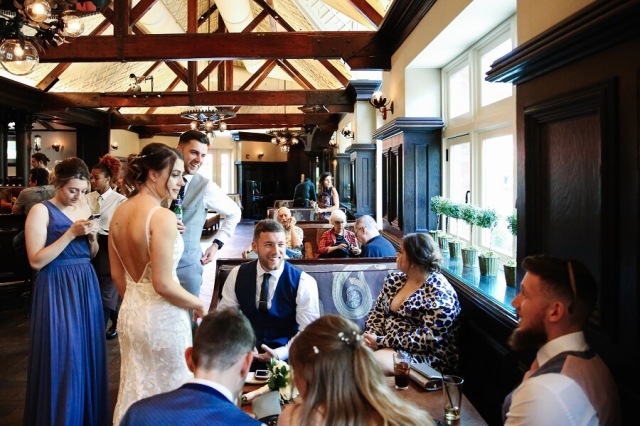 I asked Emily how she thinks we did. “After being very nervous to organize our whole wedding online in a city we had only spent five days in previously, and without ever meeting Claire or speaking on the phone, we were so happy with the outcome,” she said. “Everything ran so smoothly and I know it’s a cliché but it was actually the best day of our lives, there is no stranger feeling than walking through a packed Times Square in your wedding dress!! I would recommend it to anyone wanting a small wedding and something that’s a bit different,” she added. 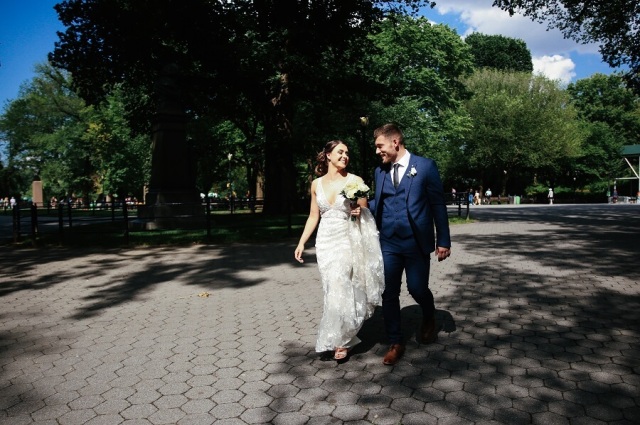