Keilani and Thomas’ Wedding in the Conservatory Gardens

Posted on October 19, 2017 by wedincentralpark

Keilani and Thomas got married in the Conservatory Gardens in July 2004.  I met her through her online community Big Love Small Weddings, a site she set up for brides and wedding professionals who are interested in small and intimate weddings to find each other.  She is a lover of elopements and small weddings, which the vast majority of the weddings in Central Park I help to plan are.  I was interested to talk to her about her experience since she got married some time ago when there weren’t the resources then that we have now.

Keilani is originally from Brooklyn, and Thomas is from Staten Island.  They met through their work in the fitness industry.  Thomas proposed to Keilani at the historic Mohonk Mountain House, which is just at the southern border of the Catskills, a popular vacation place for New Yorkers, and where myself and my husband spent our honeymoon after our own small wedding in Central Park.  They were visiting the area the weekend of Keilani’s birthday, which was a week before Christmas.  “I had no desire to have a big wedding and certainly not plan one.  The only part of the wedding planning I had any remote interest in was the planning of my honeymoon,” says Keilani.  “Back then there were limited resources for small wedding planning, and I basically winged it.  I planned everything in six months,” she added.

Like many couples back then who want to tie the knot in a no-nonsense style, and still quite commonly now, their first thoughts were Las Vegas.  “We were planning on eloping to Vegas and marrying at the Bellagio, then continue to the South Pacific Islands for our Honeymoon,” Keilani told me.  In the end, they decided to stay in New York for the wedding to include their families, but they stuck with the original honeymoon plan, because that was very important to them, and what they considered worthwhile to spend their money on.

They chose the Conservatory Gardens for their wedding ceremony location.  This is level with around 105th Street, so quite a way up North of Central Park.  And since Keilani and Thomas were locals, they knew this area would be much quieter than the South end of the park, which is very busy with tourists.  “It is a semi-private space and the grounds were serene,” she said.  It was easily accessible for their guests, from all over the boroughs of New York City, and it was inexpensive.  I think it’s important to point out for people who are not New Yorkers just how important the city’s parks are to locals.  Many people will have heard Central Park being described as “New Yorkers’ backyard” but it is so true.  So many family events and get-togethers take places in these parks; I would see kids’ birthday parties every weekend in all the parks, not just Central Park.  So, it was the natural choice for these two New Yorkers to marry in this world famous park that was so close by. 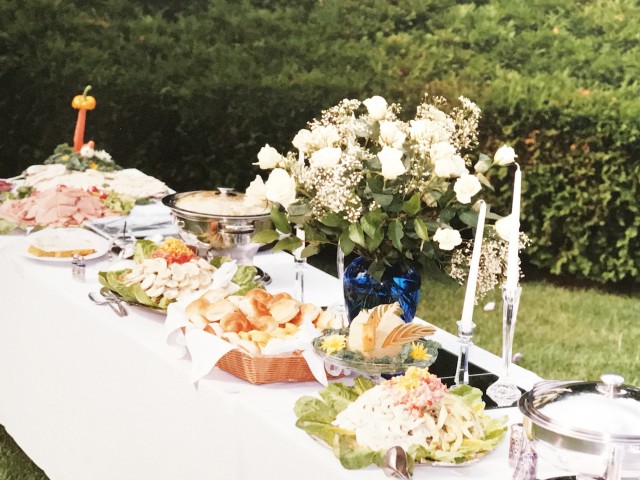 Keilani chose a simple satin ribbon style dress with an open back and carried long stem calla lilies, purchased from RK Bridal, and she did her hair and makeup herself.  They had an acoustic guitarist at the wedding ceremony, then a backyard garden reception at Thomas’ Aunt’s house on Staten Island.

Their wedding party was a small one.  They just invited immediate family and just a handful of close friends.  “If you weren’t a part of our everyday life, you weren’t invited,” Keilani said.  “It wasn’t the purpose of our wedding to invite everyone we knew,” she added. “I just wasn’t the type of bride to have a major shindig!”

“I wish back then there were resources for the type of bride that wanted something small,” Keilani said.  “I am happy with how things all came together, but at that time there were no websites I could go to for anything related to elopements and intimate weddings”.  Of course this may seem hard to believe for younger people planning their weddings now, but there wouldn’t have been the vast choice of blogs and online information that people can be swamped with now.

The couple married over thirteen years ago, so I asked Keilani if she had any regrets.  She said that if she had known then what she knows now then she would have taken more time choosing a photographer.  The photos used in this blog are digital photos of original prints, since that was the norm in 2004.  Now that she works as a wedding photographer herself, she would have given the decision more thought, but at the time the wedding wasn’t the priority for them, they were focused on the honeymoon.  And in my opinion, it looks like they had their priorities right – the wedding day shouldn’t necessarily be the focus when a couple gets married – the marriage should be, and they’ve been married for over thirteen years so they must be doing something right!  As it turns out the photographer they used for the wedding has now gone out of business.

So, now Keilani photographs elopements and intimate weddings herself.  So, many years after her own small wedding, she still truly believes in the charm and appeal of an intimate wedding celebration.  That’s why she does this for a living now, and why she started the website.  “I realized that my peers who specialize in elopements and small weddings are getting lost in the masses of websites that are geared towards more of the bigger traditional wedding,” said told me.  Her online community is a place where brides are able to communicate with one another during their wedding journey, and it’s a place of community over competition.  “Big Love Small Weddings is for the couple who desires more love and no stress!” Keilani says.

I asked her if she had any advice for anyone reading this blog, who might be considering a wedding in Central Park themselves, whether they are local or from further afield.  “If you want to keep your wedding simple and beautiful, then get married in Central Park,” Keilani said.  “I would definitely marry in the same place if I did it all over again.”