How to Include your Children in your Central Park Wedding

Posted on March 30, 2017 by wedincentralpark 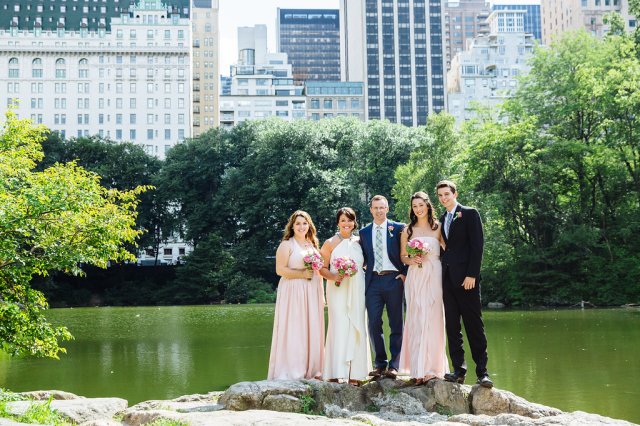 Since many of our weddings are quite small, if the guests bring their children to the wedding, then the children are probably quite close family to the marrying couple, so they may want to include them in the ceremony somehow. Either way, the bride and groom may want to include children in their wedding ceremony. 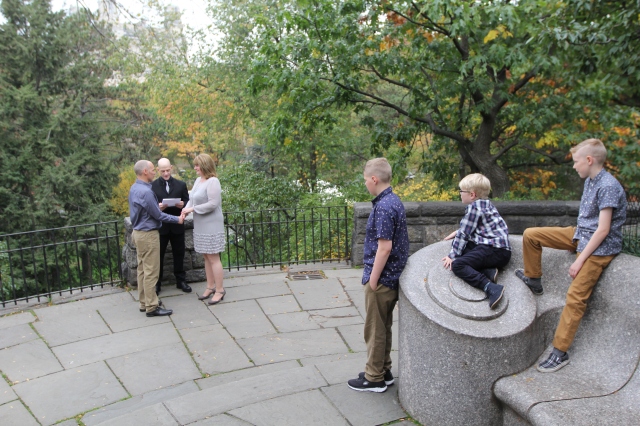 Here are some ways I have found work very well for the couples I have worked with when they have included their children at their wedding. 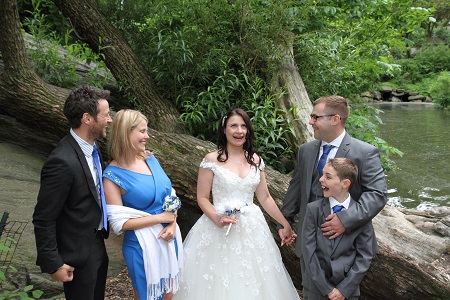 Ask the child to be bridesmaid or flower girl or groomsman
This is of course the most popular way of including children in a wedding. They get to wear something nice and co-ordinated to the bride and groom, and carry some flowers. If you are getting married in Central Park, keep in mind that the whole thing will be outdoors, and they may well want to go and play at some point. There are many playgrounds in Central Park and of course lots of places to run and jump, so keep that in mind when considering their outfit. The little girl in this picture was flower girl for these grooms and she had the very important task of dropping flower petals ahead of them as they arrived at their wedding at the Dene Summer House. 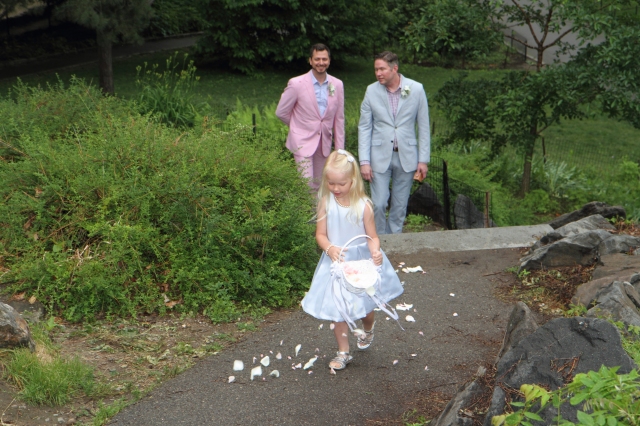 Ask the child to give the bride away
If a bride is also a mother, then I find that it is fairly common for her to have her child arrive at the wedding ceremony with her. In many cases, an older son might well give his mother away. It is quite cute to do this with younger boys, too. All they have to do is walk carefully down the aisle (or pathway in the case of Central Park) with their mom on their arm and then say “I do” when the officiant asks “who gives this woman to be married to this man?” Also, there is no reason why a daughter should not give away her mother if they want to do it that way. If you are getting married in a Park you have already thrown away some traditions, so it is a great opportunity to do things just as you want to.

Ask the child to be best man
If your child is old enough to cope with the pressure, then why not ask him or her to be your best man or your best woman. If the groom has a son (or even a daughter, see my previous comment about my disdain for traditions that do not suit your family) who would enjoy the duty of being best man, then that is a great way to include him and show him that you believe him responsible enough to take on the task. Of course, the role of the best man will depend on the age of the child, and quite what you want him to do. But even a toddler can hold a ring and stand next to his dad for a wedding ceremony.

Ask them to take photos or video
A nice way to keep a record of the day from the child’s perspective is to ask them to take photos or even video of the occasion. It is also a good way to get them involved and keep them occupied. The age of the child may well influence the quality of the photos, though! This young woman is taking photographs as her parents get married in the Ladies’ Pavilion.

Take fun photos
If you are asking your child to be good during your wedding ceremony, then it is only fair to let them have some fun afterwards. If you have got married in Central Park then you are in the ideal place to allow a bit of running and jumping and letting off some steam in the open spaces. If they are out playing, then take this opportunity to get some nice photos, like this one of these boys playing on the rocks in Central Park, taken a little after their mom and dad got married in the Shakespeare Garden.

Mention them in the ceremony wording
I always write the ceremony wording for all the couples I work with, and if they already have children of their own as a couple, I think it is important to reference the huge commitment they have already made and the joys and challenges that they have already faced as a couple. If one or both of the couple already have children from a previous relationship, then I write about the unification of two families, and how this day marks the beginning not just of a marriage, but of the commitment to each others’ children.

Ask the child to do a reading
If you have a child old enough and confident enough to read out loud in front of a group at an official event, then having them reading a poem, a piece of prose, or a bible verse is a nice way to include them in the ceremony. If they are old enough, the couple can help them to choose something that has meaning for them about love, marriage, or their parents. This would be a nice way to prepare them for the day and to talk about any changes that might be coming after the wedding. 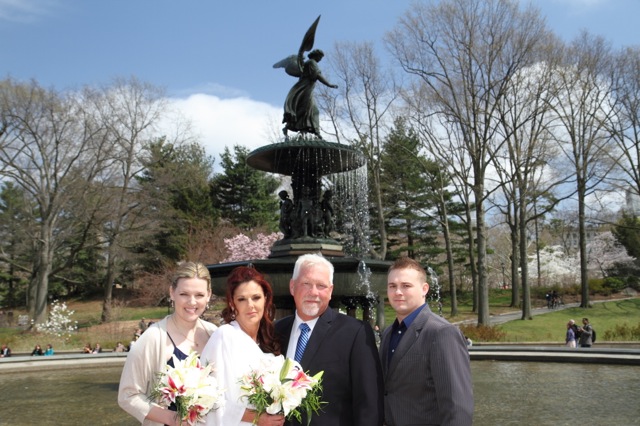 Ask the child to carry the rings and give them to the officiant
I find that this is a very nice and easy way to involve a child in a wedding ceremony, and also a way to keep them focussed on the ceremony, because they have to pay attention for when they are asked to pass the ring to the officiant. Of course, I would only entrust this task to a child old enough to keep hold of the rings. This young man carried the rings for his parents’ wedding in Wagner Cove in the snow.

Bring bubbles and confetti for them
I think it is safe to say that wedding ceremony itself might be a bit on the dull side for some small children, who do not understand the significance of the event. So, parents can use the tried and tested ways of keeping a child occupied, ie distracted, such as a tablet or a phone or even an old-fashioned book. But it does seem a shame for them not to be fully involved with all that a wedding is, so perhaps bringing some bubbles along for younger children would add to the atmosphere of a wedding outdoors. The bubbles will catch the light and look pretty in photographs. Of course kids will also enjoy throwing confetti, although this is not permitted by the Central Park Conservancy in the event permit, there might be other places where the children can enjoy throwing it.

Give the child a ring or other symbolic gift in the ceremony
I think this is especially symbolic if the child or children are from a previous relationship. We recently had a wedding where the groom gave the little daughter of the bride a ring too. After all, he was marrying her mother, but making a big commitment to the little girl, too, and he wanted to show her this with a ring. If you have older children, they may like a necklace or other piece of jewelry as a memento of the day.

Ask them to carry cute signs or balloons
If we have a big group meeting in quite an open space in Central Park for a wedding, such as on the terrace by Bethesda Fountain, then I sometimes suggest asking one guest to carry a balloon so that the group is easily spotted. I think a child would be ideal for this job. There are lots of cute signs for weddings these days, and we are not allowed to attach signs to anything in Central Park, so asking a child to carry a sign will add extra cuteness, and may also provide some useful communication, such as a daughter of a bride acting as flower girl and carrying a sign that announces her mommy. 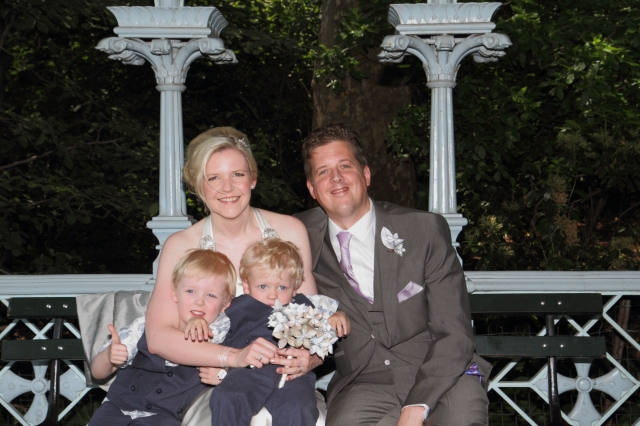 If they are old enough, ask them be a witness
The marriage license in New York State legally requires at least one witness to sign it after the ceremony, but there is space for two witnesses on there. If your child is over the age of eighteen then they can be the official witness to your wedding. It will be a lasting record of their attendance at your wedding ceremony.  This young woman is witnessing her dad’s marriage to her new stepmom in the Ladies’ Pavilion.

Ask them to give a toast
This one very much depends on the child. Many adults would dread writing and delivering a speech to a group of people, so many children may refuse such a responsibility, but some will love it. This is something the parents can help the child to write in the run-up to the wedding, as a useful way of discussing how they feel about it, and what they would like to say about their parents. 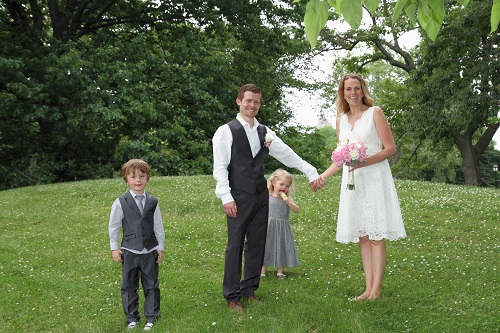 Don’t expect too much of them
Taking posed group photographs at a wedding can get boring for children and grown-ups alike. Capturing that perfect photo of the entire group is quite a challenge even without children, so if you have small children they may get impatient with being asked to stand still for any length of time. Accept that some of the photos with the children in them will not be perfect, and some will be laughably terrible when you look back on them. This little girl covered her face with her hat when she got tired of having her photo taken in the Ladies’ Pavilion.

Try to have some time out from the children
I often plan weddings with groups of mostly adults with just a few children, and there are plenty of bars in New York City that will not allow people under 21. So, if a couple want to include children only up to a certain point in the celebrations, then a guest will have to be nominated to be in charge of taking the children back to the hotel or accommodation and getting them to bed, while the rest of the party goes on until late. If the children are very little then they made need a nap in the afternoon, and this should be kept in mind when making a schedule for a wedding day. It would be terrible if the couple were saying “I do” at just the point when a small toddler becomes over-tired and decides that they have had enough. In the past I have been able to provide qualified, registered childcare for eloping couples with a small child. They wanted to say their vows to each other while someone else kept their child safe. They also wanted some wedding photographs with and without their child.

I would love to hear from others who have had their children or indeed other people’s children at their wedding ceremony, and how they made the most of it. Please comment below with any tips or advice.