Posted on January 3, 2017 by wedincentralpark

Rafael and Becca met on October 2014 at the engagement party of Becca’s brother and Rafael’s cousin.  Both of their families had suggested that Rafael and Becca would get along and had played matchmakers a little.  Their families were right and there were sparks from the moment they met, they started dating and eventually found that they were perfect for each other.  They were born and raised in Massachusetts and are currently living together there.  At the time that they met, though, Rafael was living and working in New York City and Becca was in Massachusetts.  They traveled on weekends and holidays to see each other so many of their first dates were in New York City.  They have lots of special memories together in NYC and in particular they both have fond memories of going to the Wollman Rink quite early on in their relationship in January 2015.

Rafael decided that it was time to ask Becca to marry him.  “For me, marriage is the ultimate sign of commitment between two people that love each other unconditionally.  My parents personify the meaning of marriage to me, their love, devotion, faith and commitment to each other and their family has been one of the strongest influences in my life. These are the things that I feel and want when I’m with Becca,” he told me.  Rafael felt that it was time to get engaged, and he wanted to do it in the city that had such special meaning for them both.  He contacted me for some help with planning the proposal, to ensure that it all went smoothly on the day, and for my help with booking a photographer for him.

He planned a trip not just for himself and Becca, but also for many of their friends and family.  Becca’s best friend and mom and brothers came along, and of course the cousin of Rafael’s who eventually married Becca’s brother, and whose engagement party was instrumental in Rafael and Becca meeting.  Rafael’s parents came, and his brother and sister.  Rafael’s sister was quite involved in the planning of the proposal and she was very important in helping us make the plan happen on the day.  Lots of friends and aunts and uncles and cousins came along, too.  It was a lovely, big family celebration.  Some might think this put a little pressure on Rafael and that we would be nervous that Becca would say yes but Rafael was confident.  “It was so great to have everyone there, their love and support were felt all weekend,” Rafael said.  “They all loved the idea of my proposal and were excited and grateful to be a part of the moment. They knew how much Becca and I loved NYC and were excited for a mini weekend getaway in the city,” he added.

The couple are both good skaters so Rafael decided that they could go skating together on the Wollman Rink.  I contacted the manager of the rink and he agreed to play a couple of songs that are special to the couple on the speakers at a pre-agreed time.  I arranged for my photographer to hang out nearby and take a few photos of them skating from the side of the rink, hidden from Becca’s view.  Then the plan was for Rafael to get down on one knee when he heard their special song, ask Becca to marry him, then she would say yes (of course!) and then he would surprise her with announcing that so many of their friends and family were there, and then the photographer could take some posed photographs of them.  It all went very smoothly to plan. 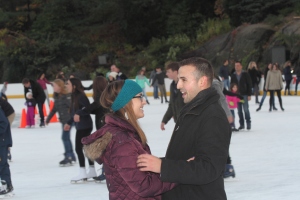 Getting engaged is a big step in a couple’s relationship.  They are making a promise to each other that one day soon they will be making some very big promises, about love and respect and unity for the rest of their lives together.  “This was certainly a big step in our relationship,” said Rafael.  They had been discussing the future for some time and they knew that they both felt the same way, this was putting the official stamp on things.  “I had decided a while ago that I wanted to commit myself to her and me proposing and her saying yes solidified that commitment. There is certainly a renewed excitement now since our relationship is advancing to a new stage,” he said.  “We are already in full wedding-planning mode,” he enthused. 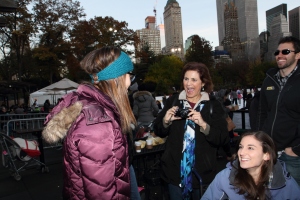 Rafael was brave enough to make the grand gesture of this proposal but he had not wanted to go ring shopping alone.  As an extremely fussy person, I think he made the right decision.  My husband and I bought our wedding and engagement rings together and my rings are completely perfect for me, which I think is important when you are going to wear something forever.  Rafael and Becca went ring shopping a few times so that he could get an idea of what she liked, and he also got advice from both their moms, and his sister, sister-in-law and his cousin (Becca’s sister-in-law, remember?) but in the end he made the final decision.  I love Rafael’s way of doing things – he involves the family in all the important stuff.

So, Becca kind of knew this was coming.  It was brave of Rafael to propose in such a public place, and it was a lovely gesture to do something so romantic with the setting and the special music and the photos, but he was confident that Becca would say yes.  She knew she was going to be proposed to soon, so she had had the chance to think about what she would say, but Rafael wanted the occasion to be a surprise.  He had said that he wanted to go ring shopping again after they got back from their New York trip so that Becca wouldn’t guess that he planned to ask her in NYC.  “I also surprised her the day before with Lion King on Broadway tickets, so she thought that was my only surprise of the weekend,” he said. “Luckily it worked and she was totally surprised,” he added.

The morning of the proposal they went over to Queens to visit where Rafael used to live. This was partly because he wanted to get Becca far away from all those friends and family in town to celebrate their engagement who were staying nearby.  Rafael’s sister was heavily involved in the plan and he kept her updated with their movements and she in turn updated others.  They returned around noon to go to the Rockefeller Center to see them put up the Christmas tree.  Then they went back to their hotel to get ready to go ice skating.  We had planned carefully to get the whole group to the skating rink in advance of Rafael and Becca arriving, but kept them hidden while the couple got their skates.  After the proposal, Rafael’s parents and siblings had arranged for a space at a restaurant right next to the couple’s hotel for some food and a celebration.  Later, they all went to the rooftop bar at the hotel and continued their celebrations there.

I asked him how I did, since I am a lot less experienced with planning proposals than I am with weddings, “I can’t stress enough how much having someone to bounce ideas off of and coordinate everything was a huge weight off my shoulders and allowed me to enjoy the moment even more, he said.  “I highly recommend using Wed in Central Park for any proposal in Central Park.  This is the only moment that any future groom has full control over and can make a memorable experience.  Whether you have a large or small idea, having someone in your corner is priceless,” he added.

They got engaged in early November and by the time Rafael and I talked again they had set a date.  They started discussing the wedding on the ride back home the very next morning, and have made lots of plans already, including setting the date for October of this year in Playa Mujeres, Mexico on October 10, 2017!  Thanks so much for sharing your story, Rafael and Becca!  I am honoured to have been a part of your marriage proposal.  I wish you both lots of luck for your wedding and your future together. For more information on planning your own Central Park wedding or proposal, visit our website, or “like” us on Facebook for photos and more inspiring stories.