Posted on December 2, 2016 by wedincentralpark Amy and Garry came over to New York from their home in Greenock, near Glasgow, Scotland this October to get married in Central Park. They met eight years ago at a local nightclub when Amy was 18 and Garry was 22. After four years of dating they bought their first flat together. They got engaged last August while on holiday in Mallorca in Spain, Garry proposed while they were walking along the beach.

Whenever they talked about getting married, they agreed that they would have a destination wedding. They knew they did not want to get married at home, but they had always thought it might be somewhere like Spain; somewhere sunny in Europe.  Then they started to think about it a little more once they were engaged.

They happened to already have a trip to New York planned for Garry’s thirtieth birthday, so they started to think about getting married while they were there. They searched online for inspiration for weddings in New York, and lots of images of Central Park came up in their searches. They loved the look of it and decided that it would be perfect for their wedding.

I asked them if they had any worries about getting married so far from home, and Amy said that they did want to feel sure that they had found a legitimate and reliable company to organize it for them. “As soon as we found Claire she put us at ease and made it a fairly straightforward and stress free process for us,” she said. 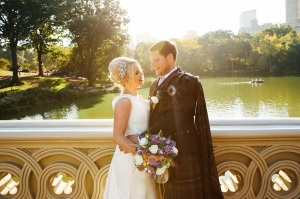 They got to New York three days before their wedding and they stayed at the Tryp Hotel. They had a wedding party of twenty-three, close friends and family. They all said that they loved the idea of getting married in Central Park, and they all agreed that the trip in general as a group was great fun.

The ceremony was held at Wagner Cove. They had loved it’s rustic charm in the photos they saw of it, and they wanted somewhere private. I arranged for them to have the photographer for an hour longer than usual. We usually suggest two hours, but they wanted a little longer. They had pictures taken at lots of locations in Central Park and really made the most of their time with the photographer. They said their favorite photos were taken on Bow Bridge. “The weather was beautiful that day and on the bridge the pictures just captured it all,” said Amy.

I arranged for a bagpiper to meet Amy, her dad and her bridesmaids at the entrance to Central Park, and he played the bagpipes as they walked through the Park, and down the steps to Wagner Cove. 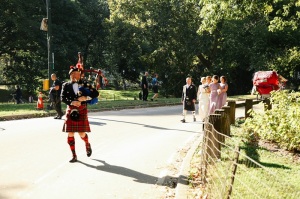 Amy’s classic white gown was purchased from a Eleganza Sposa in Glasgow and her bridesmaids’ dresses were from Coast. 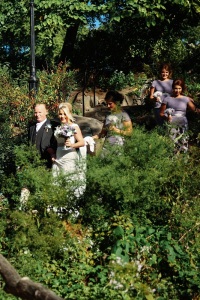 Amy’s three bridesmaids wore lilac, and the color theme of the wedding was in keeping with this. Amy had customized artificial flowers made for her and her party at home in Scotland, which they brought over with them. They looked fantastic, and are a perfectly apt Scottish bouquet of thistles, heather and roses. The buttonholes also had a rose and a thistle, too.

Amy is a hairdresser, so she knew exactly what she wanted for her hair. She spent the morning doing her wedding party’s and her own hair, and she said that was good to keep her occupied! We can see from the photos that she did a brilliant job. I recommended the wonderful Metro Look to do their makeup in their hotel room. “They where great, everyone was happy with their makeup,” said Amy.

After the ceremony at Wagner Cove, which we made a video of for them to show to extended family and friends at home, they had photographs around Central Park. After that they went on to their reception at a steak house called Gallaghers. The photographer went along, too, since they had him for that hour of extra time, so he was able to capture their celebrations there, too.

“I absolutely loved every minute of my wedding and wouldn’t change any of it,” said Amy. “I wish I could do it all again. Central Park was beautiful such a gorgeous place to get married,” she added.

“Claire was just great, she made the organisation of my wedding so easy and stress free and was always available to answer any questions that I had, I couldn’t recommend her enough,” Amy said. Thank you for sharing your story with us, Amy and Garry, I wish you the best of luck for your futures together.