Posted on August 3, 2016 by wedincentralpark

Tatiana and Fabio are both originally from Brazil, but they currently live together in Upper East Side Manhattan. They met at their Tatiana’s friend’s tattoo studio, Acqua Santa Tattoo in Chelsea, where Fabio works as a tattoo artist.

At first Tatiana thought Fabio was too quiet, and Fabio thought Tatiana was too loud, but eventually they got to know each other better. Tatiana was often at the tattoo studio to see her friend and she would see Fabio, and the group would socialise together, and one day something clicked and from then on Tatiana and Fabio became an inseparable couple. They moved in together three months after getting together and soon after Tatiana’s birthday that year, which fell on Thanksgiving, Fabio proposed in front of her whole family.

As soon as they were engaged to be married, the couple knew that they wanted to tie the knot in Central Park. They had had their first date in Central Park, in the Conservatory Gardens, so the place had a special significance for them. One day, Fabio had taken a wrong turn while walking their dog, and happened upon the beautiful Vanderbilt Gate, and when he got home he suggested they get married in the gardens. 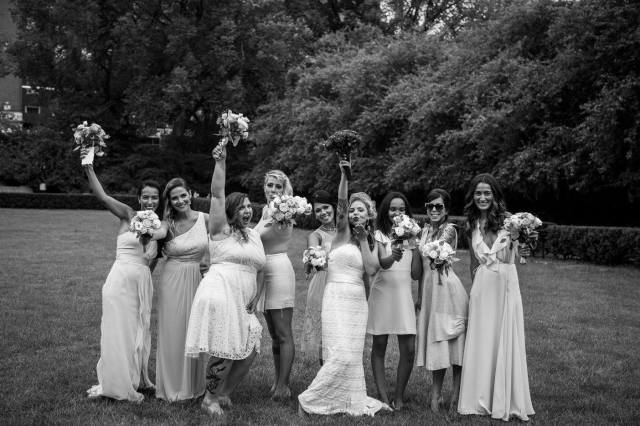 Tatiana and Fabio live just a few blocks from Central Park, so it seemed like the obvious choice for them. I completely know how they feel. Myself and my husband were living just a few blocks away from where Tatiana and Fabio live now when we decided to get married in Central Park. We went running there and we walked our dog there, it seemed so natural that this beautiful place that featured so heavily in our daily lives should be the place where we got married. We have something else in common with Tatiana and Fabio, we also took our dog to our wedding. 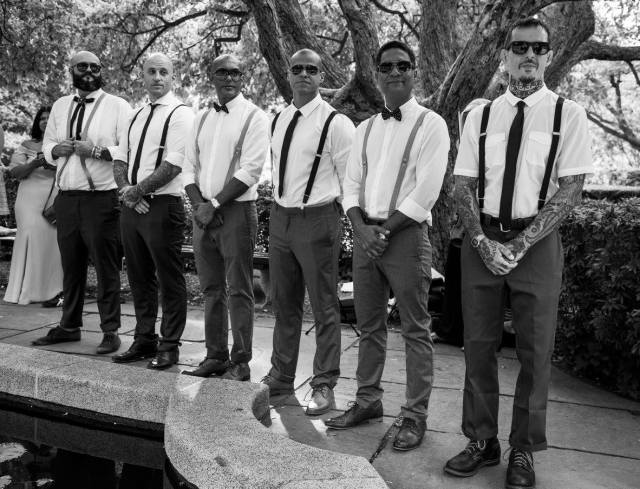 The couple chose the Burnett Fountain at the Secret Garden in the Conservatory Gardens for their wedding ceremony location. Since Tatiana and Fabio are New Yorkers, they really didn’t need too much from me, just pieces of advice here and there, and the purchase of their event permit. 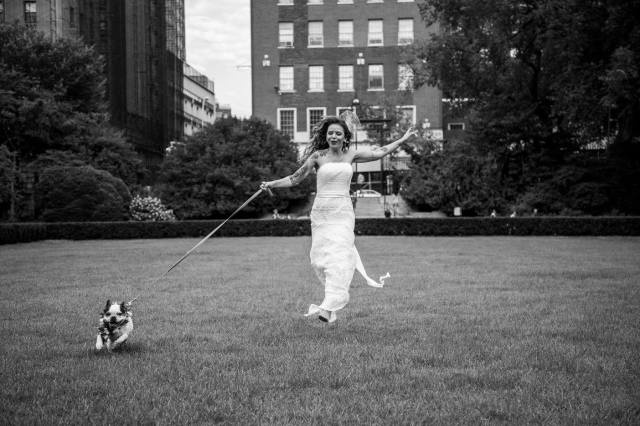 The Conservatory Gardens carry an extra charge (not mine – theirs – for more info, check their website), all the other locations have a fee of $25, which I build in to my packages, the Conservatory Gardens cost $500, so it costs $475 extra to get married there on top of my usual package prices. Tatiana and Fabio did not need me to provide an officiant for them, that friend who introduced them was their officiant at the wedding ceremony.

Tatiana wore a beaded lace sheath wedding gown with godet inserts by Galina, purchased from David’s Bridal. Her hair and makeup were done at the Maria Bonita Spa and Salon.  Their photographer was Tiago Chediak.

Tatiana and Fabio are locals so they were able to have lots of friends and family at their wedding. Tatiana told me that they all loved the beauty and energy of Central Park. That evening they had a beautiful cocktail party overlooking the sunset. I always ask people if there is anywhere in New York they would recommend, and this couple is Brazilian, so their recommendation is a Berimbau, a Brazilian restaurant.

I asked them if they would recommend a wedding in Central Park to other New Yorkers, or visitors to their city and Tatiana said “oh yes it was so magical and dreamy to be married in such a beautiful location.” She added, “Claire helped me set everything, answered all my questions in a speedy manner, I would do it just the same all over again, thank you Claire.”

Thank you for sharing your story with us, Tatiana and Fabio I wish you the best of luck for your futures together in New York, I am honoured to have been a part of your wedding. For more information on planning your own Central Park wedding, visit our website, or “like” us on Facebook for photos and more inspiring stories.