A Wedding in the Dene Summer House, Central Park

Mitchell and Brian brought their close friends and family over from Texas this June to get married in Central Park.  They chose an unusual and lovely location for their ceremony, the Dene Summer House.  They got engaged in August last year.  The couple were taking a walk when Brian popped the question.  “I immediately started worrying about logistics; where would we get married, who would we invite, when would we do it, etc,” said Mitchell.  Brian had to interrupt him to say “you have to say yes before we can start planning!”  Of course Mitchell said yes. 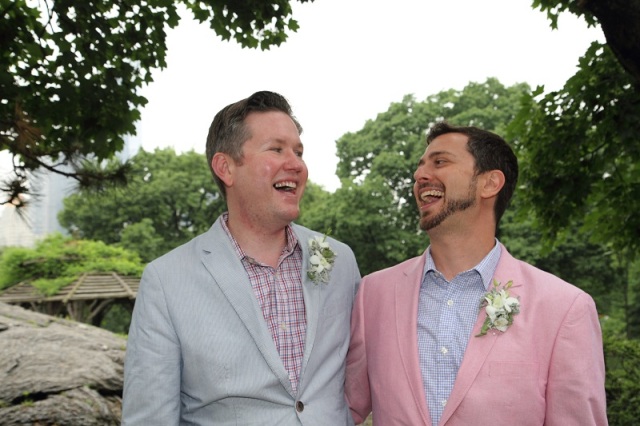 “We never really thought much about marriage for the first fifteen years of our relationship,” said Mitchell.  This is because same-sex marriages were not legally recognized during those years of their relationship.  However, once the Supreme Court ruled in favor of marriage equality, they knew that they were ready and excited to make this pledge to each other publicly.  Like countless same-sex couples at this time, they had spent many years in a committed relationship with really no legal way for them to declare each other as their significant other, so had no protection if something were to happen to one of them.

They really struggled to agree on a suitable location for their wedding at first.  Brian’s family are in Texas and Oklahoma and Mitchell’s family are in Nebraska, so to begin with they were looking for somewhere in the mid-west and had almost settled on Wichita, Kansas.  It seemed like it would be a fitting place since it is central to both their families and it is also where they first met.  However, once they began discussing plans with other people it seemed the marriage was quickly going to get out of their control.  I hear this many times from couples who just want to escape having too much fuss and choose New York almost as a neutral territory.  They already had a trip planned for DC and New York City for Brian to attend a conference in DC and he suggested that they just get married in New York while they were there, and it felt like the right thing for them.

Mitchell and Brian visit New York at least once a year and every time they are in the city we visit Central Park. “It is such a beautiful oasis in the middle of the city that we both love,” said Mitchell.  “The location that we chose, the Dene Summer House, we had found by accident several years ago after being trapped under a bridge nearby waiting for the rain to pass,” he said.  I am glad that they did find it, because it is a lovely spot.  However, there are steps up to it, so it may not be suitable for elderly guests.  Also, the Central Park Conservancy do not issue permits for events at this location.  That does not mean that couples cannot get married here, just that we cannot guarantee that your party will have exclusive use of the area for a wedding in advance.  That was not a problem for Mitchell and Brian and their party, though.

I asked them if they had any concerns about getting married in New York.  They said that since they do not live in New York they were a little worried at first about making arrangements from a distance.  Mitchell had contacted several wedding planners in the area before ultimately deciding to go with us at Wed in Central Park.  He said that having a planner to book a trusted photographer and officiant made it whole lot less stressful.

Mitchell and Brian generally stay in the Midtown area when they visit the city and this time was no different.  They stayed at a boutique hotel called The Roger that they said was fantastic.  They arrived on Memorial Day, the Monday before their wedding, to allow enough time to get their license from City Hall, which all couples must do themselves, together, in person.

Their wedding party was medium-sized by our Central Park standards.  From Brian’s family they had his mother, brother, sister-in-law, niece, nephew, and a cousin.  From Mitchell’s family his mother and two sisters attended.  There were nine other guests including friends from Wichita, Terre Haute, and Texas.  The night before their wedding they all ate together at Fabrick, David Burke’s restaurant in the Archer Hotel.  After the wedding ceremony Mitchell and Brian took their guests for a family-style lunch at ABC Kitchen, then later on in the day they all met up again for a drink and a late dinner at the Smith Nomad.

As always with couples marrying outdoors, the weather was on their mind in the run-up to the wedding.  “All week long before our wedding the skies were sunny and clear, but rain and thunderstorms were predicted for the day of our wedding,” said Mitchell.  “Actually, the highest chance of rain that Friday was predicted for the exact hour we intended on getting married, he said.  But in the end they were lucky.  Though the sky was over cast, they never saw the predicted rain.  I find this is very common in New York, I don’t know if the forecasts are deliberately pessimistic so that people are pleased when the bad weather does not arrive, or if the rain has all fallen over other parts of the city before the clouds get to Manhattan.  But Mitchell’s suggestion is a good one; “have a contingency plan, just in case,” he says. 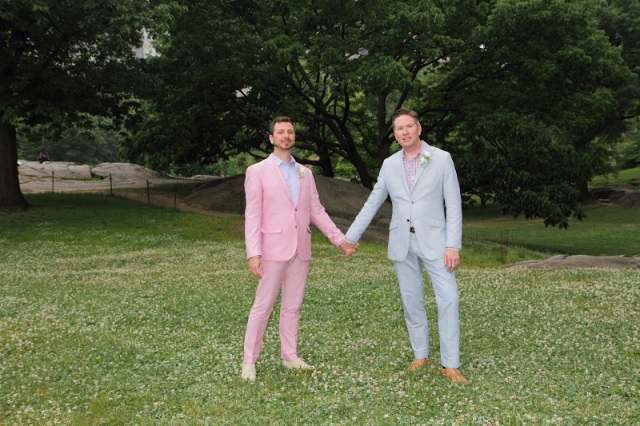 “We would not have been able to make this wedding happen without the services of Wed in Central Park,” said Mitchell.  “Claire’s professionalism, diligence in planning, and the courtesy of our officiant and photographer were essential to us getting hitched without a hitch,” he said.  Thank you for sharing your story with us, Mitchell and Brian, I wish you the best of luck for your futures together, after almost twenty years together, I’m so glad that we were able to be a part of your wedding. 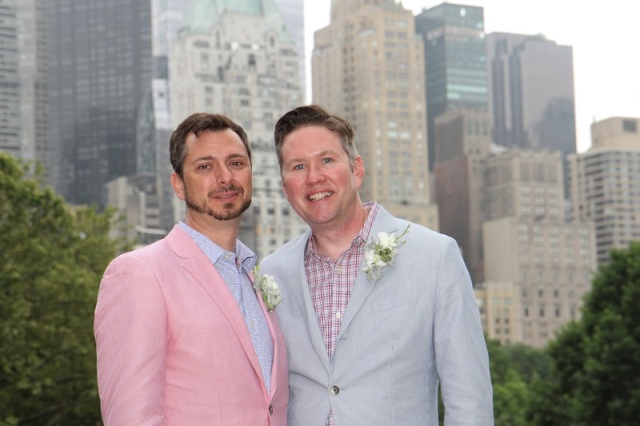 1 Response to A Wedding in the Dene Summer House, Central Park