A Wedding in the Ladies’ Pavilion in May 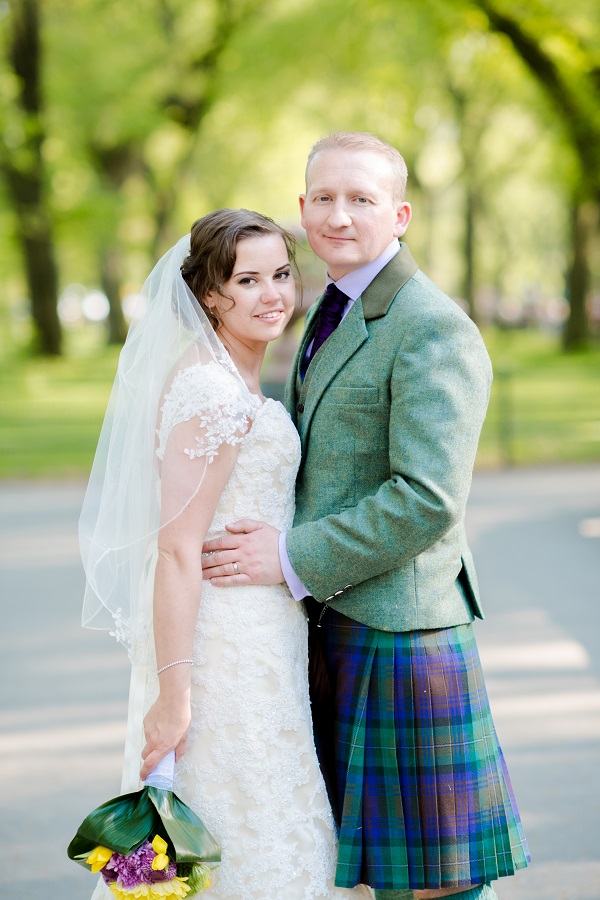 Louise and David brought their close family from Glasgow in Scotland to Central Park this May for a small and intimate wedding. The couple met through work five and half years ago. They worked for the same jewellery company in stores opposite each other. 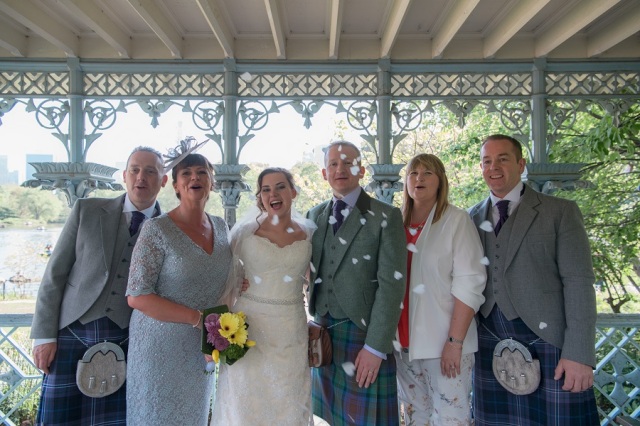 Not long after they had bought a house together, David proposed. It was on a lovely Summer’s day, which, as Louise says, is a rare day in Scotland, on a bridge in a park. Although they had discussed getting married it was still a shock to her and she was not expecting it. Louise jokes that she was disappointed that David did not get down on one knee and did not put the ring on her finger, and David jokes that Louise took the ring out of his hand too quickly for him to get a chance to put it on her finger! They got dressed up and went for dinner and drinks that evening to celebrate before telling their friends and family. The only person that knew was Louise’s dad, because David had asked his permission a few days previously.

When it came to planning the wedding, the only thing that they knew for sure was that they wanted it to be small. They did a bit of research on where to have a wedding in the Glasgow area but could not even find one that they felt would suit them. David lightly suggested going away to get married. That got Louise thinking and she checked out a few locations, they both like cities so she looked in to a few options. New York had been where they first went to on holiday together so it seemed a good choice, and it had the benefit of being in an English speaking country, which they thought would be easier for wedding, so they started looking in to the options for a New York City wedding. 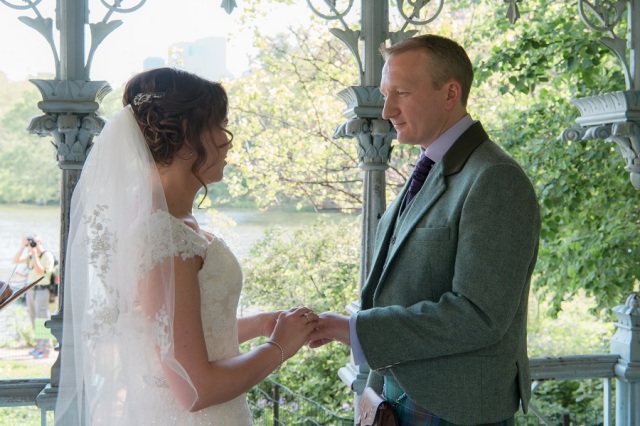 “After a day or two of research online we found Claire and after reading reviews and blogs we were hooked on the idea of Central Park,” said Louise. “We briefly considered getting married at City Hall but thought it would be more romantic to get married in Central Park,” she said. After they had been to City Hall to do their wedding paperwork, they said that they were very pleased that they chose Central Park over the Clerks’ Office at City Hall “as it this seemed much more a process and impersonal than the romantic occasion we were looking for,” said Louise. I would of course agree, although I am biased. We write the ceremony for each couple, they just recite the standard lines. Also, couples can schedule a time with us, they just have to show up and wait their turn at City Hall. And, then there’s the photo opportunities in Central Park…

They chose the Ladies’ Pavilion for their ceremony location. This was partly because it would provide a little shelter from rain or shade from sun if needed. In the end they got a lovely sunny day. “Our favorite photographs were taken by the Lake in Central Park, at the Top of the Rock and by the Flatiron Building,” said Louise. Their photographer was the very talented Susan Shek, who was with them for much of the day, going around several locations in the City. “We had picked six locations with our photographer, but unfortunately due to time and traffic we could not make the Brooklyn Bridge and the High Line,” said Louise. They did manage to find time to chill out a little in Central Park for a couple of hours after their ceremony, though, which they said was a welcome break from rushing around the city getting all those fabulous shots.

Louise wore a light champagne colored wedding dress with ivory lace overlay from a store called Anne and Bobbies near Edinburgh, the designer was Maggie Sottero. The bride, her mother, and her sister in law had their makeup done by Appease 2 You, who came to their hotel room. David purchased a kilt from a local store in Glasgow with a bespoke jacket and waistcoat, the tartan is Isle of Skye. Louise’s dad and David’s brother in law hires kilts from the same store. For flowers they went to a little florist in the Port Authority, the men in the party went to pick them up the morning of the wedding, while the ladies were getting ready.

Theirs was a small group. They had Louise’s parents, and David’s sister and her partner as guests. Louise’s mother had been quite surprised when they told her that they did not want to big, traditional wedding at home, but she was happy with their choice of a destination weddings once she had got used to the idea. The couple had invited just two guests each. “The thought of asking people to spend a lot of money and use the holidays from work to go to New York for us was just too much in our opinion,” said Louise. A sentiment I can completely understand. “Most people respected our decision and were happy and many sent best wishes for us to enjoy the day and send them some photographs,” she added.

They had rented a limo and driver all afternoon. It took them for photographs at the Top of the Rock, Times Square, The Flatiron building and then dropped them off at the Natural History Museum before the ceremony. After the ceremony their guests went to the Campbell Apartment in Grand Central for a few drinks, a must for any Scottish visitors to New York, while the couple went with their photographer for a walk through Central Park to take some more photographs at Bow Bridge, Bethesda Terrace and Fountain, and The Mall.

After that, they took a cab to Grand Central for a few more photos then met up with their guests in the Campbell Apartment, then they were back up to Central Park eat in the Tavern on the Green restaurant. “The restaurant was lovely, not casual or pretentious and absolutely delicious. The staff were fantastic, I got a complimentary glass of champagne and the staff were very accommodating taking our photographs,” said Louise. “As a surprise for me, David, my dad and David’s brother had gone to Dean & Deluca and bought a wedding cake and delivered it to Tavern on the Green which they which they were happy to serve,” she added. After their meal they went to The Plaza for drinks “and by midnight we were ready to call it a day,” Louise said. I’m not surprised, after a busy day like that! 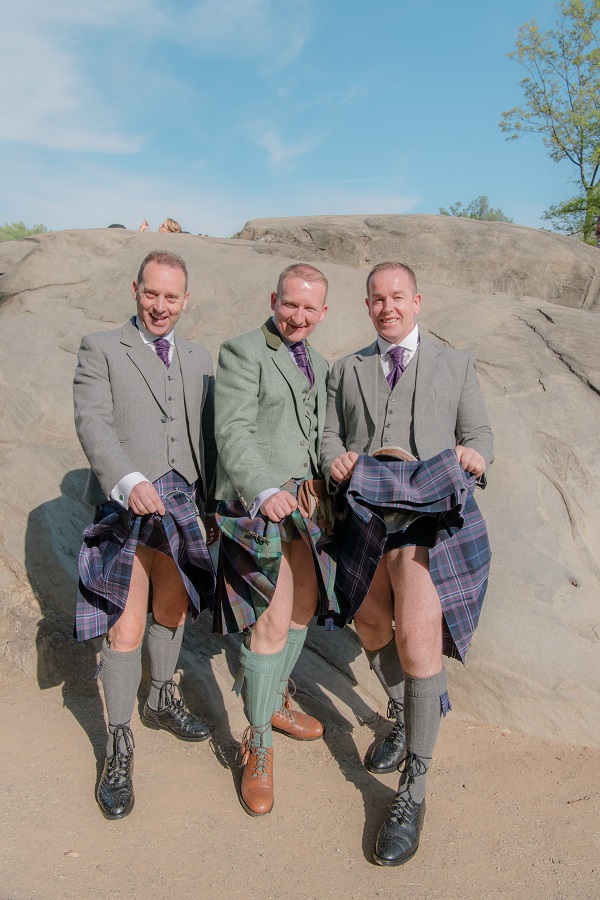 “Claire is very helpful and will answer all the questions you have, we would highly recommend her, and she is very professional, thank you! Also our officiant was very friendly,” said Louise. Thank you for sharing your story with us, Louise and David, I wish you the best of luck for your futures together. For more information on planning your own Central Park wedding, visit our website, or “like” us on Facebook for photos and more inspiring stories.

3 Responses to A Wedding in the Ladies’ Pavilion in May