Posted on October 19, 2015 by wedincentralpark

Danielle and Michael “eloped” to New York this October to get married in Central Park. Michael is a chef and Danielle is an independent author working in education. They met about thirteen years ago in Knox, Indiana, because they had the same bus route to school the first year Danielle moved to the town. They became friends then, they both moved to Indianapolis and their friendship continued.

Then, by chance, Danielle had an extra ticket to see the musical Wicked and she offered it to Michael. They went together and that date sparked a romance. Their dating felt easy after the many years of friendship. Getting married is important to Danielle and Michael because it signifies the beginning of a family. “We want to acknowledge the significance of our relationship and make it legal,” said Danielle. 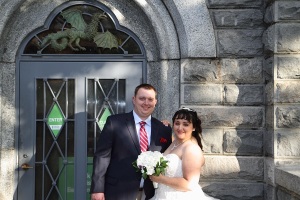 Danielle and Michael discussed many wedding locations and style options before deciding on a wedding in Central Park. They talked about a backyard wedding, a courthouse and reception option, a hotel wedding with a theater experience afterwards, eloping to the tropics, and various other options. At one point, they thought that they had planned the perfect local wedding in Indianapolis until they started considering their anniversary date. With Mike being a chef, his availability is minimal and getting the anniversary date right was really important to the couple for their long-term happiness. “A wedding lasts a day. An anniversary comes every year,” said Danielle. The Spring wedding they had planned would clash with many family events, holidays, and chef “blackout” dates in future years. They tried to find another date that would work for all their guests and they eventually realized that there was no way to make everyone happy, and the options that might have made their families and friends happy did not even come close to representing who they are as a couple. 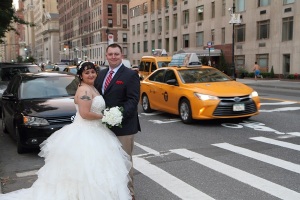 After deciding on an autumn date, they felt that finding an elopement package might be their best option to have both the ceremony date they desired, an authentic honeymoon, and ultimately a wedding that represented them. After a lot of web research, they decided on a New York wedding. Their love of the arts and food made it the perfect location for them to begin their new chapter together. “I mean, it all started with a show, right?” said Danielle. They had both already travelled to New York, so they knew they could skip a lot of the sightseeing that often overwhelms a trip. Once New York chosen, they quickly found my Wedding Central Park blog, which led them to my Wedding in Central Park. “They were easily the best option from what we could glean online. We chose them for our wedding trip, because they offered the most coherent explanation of their services. They also had a wide variety of options for locations, guests, and personalizing your ceremony. Ultimately, they also offered the best packages. Others presented a base package with lots of features you may not want and only went up in price and amenities from there. Wed in Central Park seemed much more inclusive and accommodating for our needs. Their packages only presented the wedding staples, and then offered us the options of add-ons. I really appreciated this, and I was surprised how few others offer the add-on option. It seems reasonable, and it was extremely easy to get precisely the services we wanted for a reasonable, affordable price,” she said. 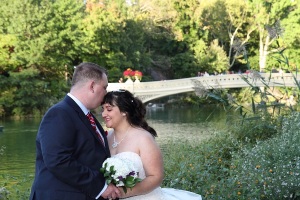 I asked Danielle if she had any concerns about getting married in New York. “Of course!” she said. “How would we get everything we needed there? What if the airline lost our luggage? What if the photographer or videographer didn’t show up? What if it rained? What if we just PayPal-ed our money to an abyss and didn’t get a location permit or officiant or anything? There were lots of reasons to be paranoid about the process, but paranoia is all it was. Everything we paid for, we got. No surprises. All we had to do was answer emails along the way and show up,” she said.

Michael and Danielle arrived in New York the day before their wedding day, and they wanted to get their marriage license on the same day as their wedding date. So that meant that once they had their license (for more information on that please check my blog about getting your marriage license in New York City) they had to pop across the street to get a judicial waiver in order to get married in less than 24 hours, as is the usual term of the marriage license. They said that they only had a very short wait to leave their application there to be signed; the judge only signs them twice a day. While they waited for it to be signed, they went for coffee and breakfast. Then they went back to pick up their approved application. Danielle said that it was all very simple and efficient.

The benefit of being at City Hall on the morning of their wedding day is that they were able to go to one of the street vendors selling bouquets outside to couples who are getting married there. Danielle chose white hydrangeas with small purple flowers for accents framed by large green leaves and wrapped with a champagne ribbon. Danielle wore an Oleg Cassini strapless, organza and lace bridal gown, which she brought in her carry-on luggage, would you believe?! She finished her look with an ivory lace headband and a sparkling statement necklace.

Their wedding ceremony was at Belvedere Castle Terrace. We had arranged their officiant, photographer and videographer. “They knew the park grounds well, and they were exceptional in their timing and navigation,” said Danielle. “I felt like they really wanted to make the most of our time, and they were attentive to our hopes for the overall products. They understood that even though there were only two of us, it was still an important day,” she said. After they had completed their ceremony and signed the paperwork they moved off around Central Park for more photographs. Danielle had given us a list of poses that she especially wanted to capture on the day, so they worked their way through that list in the various locations. “Some of my favorite pictures came from unexpected places,” said Danielle. “We precariously crept to an area with a lot of stones near the Lake. The water, trees, and the New York skyline in the background were beautiful at this time of year,” she said.

That evening they ate at Le Bernadin, a restaurant with 3 Michelin stars. Michael is a chef so dining at a high quality restaurant was a top priority for the couple. They both had the 7-course tasting selection with the wine pairings, and they said it was amazing.

After they returned from their trip, they shared their video with loved ones and most were pretty impressed. “Because the videographer captured us arriving and in other candid moments, he was able to edit a truly beautiful retelling of that moment for us,” said Danielle. “Everyone had nothing but nice words to say about the video and the personal touches in the ceremony. After seeing it, I think more people felt involved and felt like we did it perfectly for us,” she said. 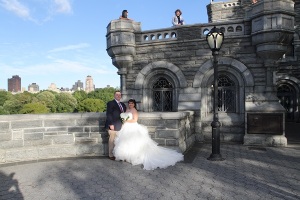 “We wanted no stress, and we wanted to save money,” said Danielle. “We wanted something intimate and semi-private, but we still wanted some keepsakes from the day. Wed in Central Park helped us achieve all of this,” she said. “They did all the fussy stuff that no one wants to do like acquiring permits and securing a photographer, and we focused on all of the stuff that you want to like writing bespoke vows or choosing a great New York chef. While stress-free, we also weren’t left out. Our ceremony wasn’t written for us, but we also didn’t have to start from scratch; Claire and I did it together. We had the opportunity to choose our photo locations and poses and add on videography elements, while our wedding team secured the location, directed, and advised us on lighting. We did all of this with a small fee and an inbox. Claire did a wonderful, professional job of keeping us informed, following up, and including us in decisions. I always felt like I could ask questions, and she always responded in a timely manner. Really, Wed in Central Park is there to help bring you the wedding you ask for, and I couldn’t have asked for anything more,” Danielle said. Thank you for sharing your story with us, Michael and Danielle, I wish you the best of luck for your futures together in your new house. For more information on planning your own Central Park wedding, visit our website, or “like” us on Facebook for photos and more inspiring stories. 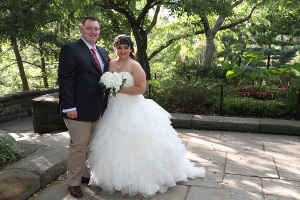