Posted on September 11, 2015 by wedincentralpark

Janet and Tim brought their children with them from Toronto in Canada to get married in Cop Cot in Central Park this August. It was important to them that their guests be their children; Janet’s daughter Maggie and Tom’s children Jack and Rachel, because they see this marriage very much as a joining of their two families.

I asked Janet why they chose a Central Park wedding. Theirs was almost, but not quite, an elopement, with only their children as guests. “When I thought about weddings when I was younger, it was always something big,” she said. “Big family, big dress, big party. And then I got older, found a partner who I adore, and suddenly a wedding for Tim and I started to look at what is most important to us as a couple and as a family. We actually planned two other “big traditional” weddings and ended up canceling both of them, and always coming back to what we actually wanted to focus on. There are infinite possibilities and gorgeous ‘Pinterestable’ ideas out there, but when the time came to our version of events, we quickly stripped it down to the bare essentials of what really mattered to us. Somehow limiting our options by choosing to elope ended up opening a whole new world of possibilities for our day. For us, our focus was on each other and merging our new family.” I think this is an excellent way of putting the sentiment I hear so often with couples who choose to have a destination wedding in Central Park, it is about taking the focus from doing the expected thing and moving it back to you as a couple and what you would like to do on a special day. 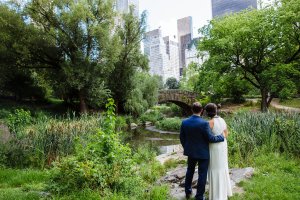 “We chose New York City simply because we love it there so much,” said Janet. “For us the city feels both exhiliratingly adventurous and familiar at the same time. We planned a five day wedding trip with our kids that included all the famous landmark sight-seeing spots (Brooklyn Bridge, the 911 Memorial, NY Public Library, the Metropolitan Museum of Art, a Yankees game, Mama Mia on Broadway, 5th Avenue, Times Square, the Rockefeller Center, the Empire State Building, Radio City, and various fabulous restaurants.” They had a busy time. They stayed at 50 Affinia NYC, they said it was a great central location and had spacious rooms, which I find are not common in Manhattan hotels.

Janet told me, “our wedding day came down to a handful of simple pleasures: sharing breakfast in the morning, a dress that made me feel incredible, a timeless suit, saying ‘I Do’, dinner at the Loeb Boathouse, and later Mama Mia on Broadway.” They all wore their wedding clothes to the theater, which got them noticed, which got them some special treatment and celebrity, so any other couples considering seeing a show on their wedding day may want to bear that in mind.

I asked Janet if she had any tips to share with other couples considering a wedding in Central Park. “The trick was to have an incredible wedding planner to help you with all of the details. Claire Ady was fantastic. Claire is a pro and was very responsive and gave us great advice every step of the way.” They had spent some time deliberating about whether they would get married in a chic, simple City Hall ceremony or in Central Park. An advantage that a wedding in Central Park has over a City Hall wedding is that you can schedule the time. At City Hall, couples have to wait their turn for their ceremony, and if you are not sure when your ceremony will be then it is hard to plan around it and make restaurant reservations, or other plans for the day. Also, their ceremonies are standard, and we write the ceremonies especially for each individual couple.

Janet and Tim chose Cop Cot for their wedding location. “It is a gorgeous rustic wooden structure that is covered with foliage. It is close to one of the entrances to the Park and was very easy to find. We were thrilled with our choice,” she said. It is a lovely spot, recently renovated. It’s location allows a member of the party to stand at the entrance, and look out for the bride’s arrival, as she enters the Park, before she walks up the short hill to Cop Cot, which is quite useful if you would like to be announced to your guests as a bride. Janet’s dress was designed by Carmen Marc Valvo, and her bridesmaids’ dresses were from the Vera Wang White Collection. Tim’s suit was by Tommy Hilfiger. Janet’s bouquet was supplied by Scott’s Florals.

“Claire helped us with our wedding vows and arranged our officiant for us,” said Janet. “Our vows really captured the true importance of the promises that we made to one another. I have to admit that I was a tad anxious about how all of this would work, since we live in Canada, and had worries about showing up at Cop Cot to find ourselves on our own. However, everything went without a hitch,” she said. This is a common worry for couples, and an unavoidable hazard of doing business over the internet. I do hope that this blog of real couples’ stories helps future couples feel confident that we will do a good job. 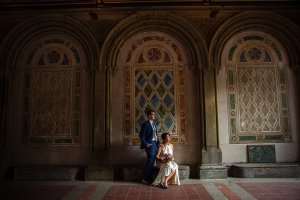 “My hair/makeup lady, Kerry Lou Brehm arrived exactly on time to our hotel,” said Janet.  We do have a and makeup team that we recommend, but Janet is a part-time freelance wedding makeup artist herself, so she wanted to choose her own from the wider choice that New York offers, she said that Kerry Lou uses fantastic high end products, is an expert at airbrush makeup artistry and knows how to apply makeup that will last for hours.  “Our officiant Hope was lovely and also on-time and she made us feel very calm, relaxed and performed an authentic and meaningful ceremony. We arranged our own photographer but Claire has plenty of suggestions in this department as well.”

Some of my couples go with one of the photographers I work with, some choose their own from one of the many New York has to choose from, and some have no professional photographer at all. We can go with whatever suits the couple. Janet and Tim chose Laura Pennace as their photographer. “She is relaxed, creative, energetic, professional and so knowledgeable about Central Park. She made us all feel like this was the most important wedding that she had ever photographed,” said Janet. 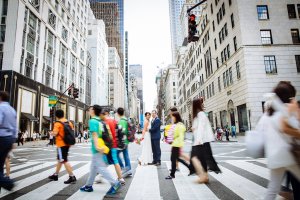 Janet admits that eloping with your kids may not be for every bride and groom but for Janet and Tim it was the perfect decision. “You are, of course, trading in a traditional big day for something much quieter and very, very intimate. It forces you to find the heart of the moment with your partner and children and ignore most of the frills that traditional weddings often include, but it is not as extreme of a decision as it sounds. We had a gorgeous wedding reception at home when we returned to Canada,” said Janet.

Thank you for sharing your story with us, Janet and Tim, I wish you the best of luck for your futures together, with your newly unified family. For more information on planning your own Central Park wedding, visit our website, or “like” us on Facebook for photos and more inspiring stories.