Hollie and Craig came over to New York from their home in Grimsby in England this May to get married in Central Park. They have been together for almost twelve years, having met in Secondary School. Craig proposed on Boxing Day 2009 at Hollie’s parents’ home. He had been very nervous and Hollie had been wondering what was wrong until she opened her last Christmas present and it was a ring box. They were both still at University at the time, so they knew that they would be engaged for several years while they both worked on building up their careers following studies.

During their engagement both of Hollie’s parents passed away, Craig of course supported Hollie through this, and after some time they both felt that getting married would be a fresh start for them. “It was important for us to have that moment where we acknowledge how much we mean to each other,” said Hollie. 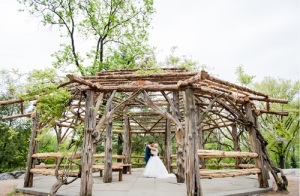 They considered a big white wedding day at home, but they felt discouraged at spending what they estimated would be over £14,000 just on one day. They discussed a registry office wedding, which would be simple and cheap but Hollie felt that she wanted something a little more exciting than that. So instead, they started discussing what was important to them about their wedding day and they agreed that ultimately it was that they were together and they were happy. It was then that they decided that going abroad for their wedding would suit them both best.

So, then they had to choose a destination. Neither of them wanted a beach wedding, Hollie wanted the traditional white wedding dress and she did not feel that would suit the feel of a beach wedding. They brainstormed a little on places they had always wanted to visit and New York came out top. When researching the practicalities of marrying on New York, Hollie happened upon the Wed in Central Park website and blog. She fell in love with the idea of a Central Park wedding, “it was the outdoor setting in the middle of s bustling and vibrant city,” said Hollie. She showed the website to Craig and he agreed. “You get to be outdoors in the most famous park in the world whilst the city lives around you. The contrast of the building and the lush green of Central Park is so unique, we wanted something special and different and this was it,” said Hollie. 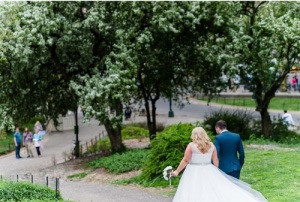 When they told their friends and family that they we were planning to go to New York to get married they got mixed reactions. Many were pleased for them but some thought it selfish of them to not have their big day at home. Hollie and Craig did not think that their wedding day should be about what the wedding guests wanted, they thought that it should be about what the bride and groom wanted (I agree). They told people that the wedding was in New York and that anyone would be welcome to attend if they could afford to make the trip. So, Hollie and Craig could relax and plan their trip and let their guests do their own planning. In the end they had a party of nine guests, which felt just the right sized group for them, “and it was lovely to have them there on the day,” said Hollie. “I think our biggest piece of advice to other couples regarding this particular dilemma is; if you both want to get married in New York, do it. People will forgive you.” After the wedding almost everyone they know said how magical it was to go to New York to get married. 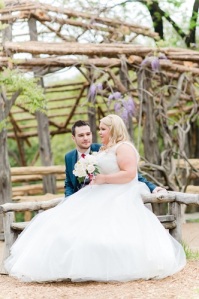 Like every single other couples who gets married outdoors, Hollie and Craig were concerned about the weather. They had a look at some weather data for New York and chose May for their wedding. But they said that they decided pretty early on that whatever weather they got on the day, they we were making the choice to get married outside. “You can play it safe in a building or take a slim risk of a little rain and get the most amazing, unique day,” said Hollie.

They stayed at Park Central Hotel on 7th Avenue, “it was a fabulous location for our Cop Cot wedding and to access the rest of Manhattan,” said Hollie. “It was a beautiful boutique hotel, very comfortable and a little luxury for our wedding week away.” After a week in New York City they flew to Las Vegas for a mini-honeymoon. 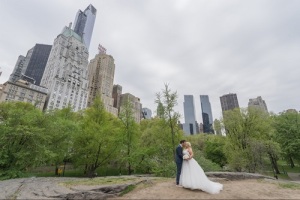 Their wedding ceremony was in Cop Cot. They chose it because they loved how beautiful the structure was and they wanted to be outside and to be able to see the Central Park around them. “The location lends itself so beautifully to any photographs and the hotels and buildings surrounding look so magical in the background,” said Hollie. “We stayed very close to Cop Cot for our photographs using the rocks around it for poses and the structure and benches.” 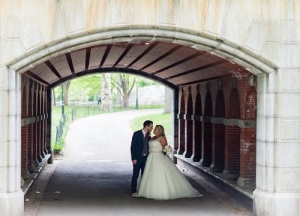 Hollie had always wanted a big, full-length wedding dress, but once they had chosen Central Park for their wedding location, she did wonder whether she ought to choose a shorter or simpler dress, but when she found her dress she just knew she could not bare to pick out anything else. She decided to be prepared for her full length gown to get filthy, and it did, but that was part of the experience for Hollie, “what’s better than finding random twigs and leaves later on!?!” she said. She wore a full length tulle and chiffon gown with a hoop and a train with diamanté detail on the waist and shoulders. Craig wore a three piece suit from Topman and some laid back Converse. Hollie bought some silk flowers at home in England and brought them with her. Hollie had a little make up lesson at home in England and decided to do her own make up. Herself and her bridesmaid had their hair done at The Drybar.

After their wedding ceremony and photos with their photographer Susan Shek in Central Park, Hollie and Craig went to the Top of the Rock and a Times Square for more photographs. After being on her feet non-stop for four hours in dress and heels Hollie was exhausted, so they went back to their hotel room to relax a little before an evening meal at The Capital Grille, which they highly recommend. They decorated their table with hearts for them. The service was impeccable, the food fabulous and they all got complimentary desserts and a photograph to take home. 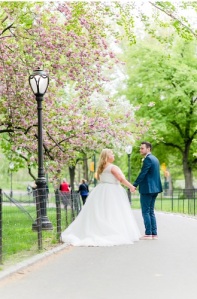 “Getting married in Central Park still feels like a dream,” said Hollie. “It was more amazing than we could have ever imagined and New York will always have the most special place in our hearts now. Claire made the whole process of getting married so easy and simple. I always felt at ease that things were getting done and everything was on track, she made the planning process a breeze. I can’t imagine how much stress it might have been if we had done it all ourselves. We cannot thank you enough Claire for all of your help to make our day amazing,” said Hollie.

Thank you for sharing your story with us, Hollie and Craig , I wish you the best of luck for your future together. For more information on planning your own Central Park wedding, visit our website, or “like” us on Facebook for photos and more inspiring stories. 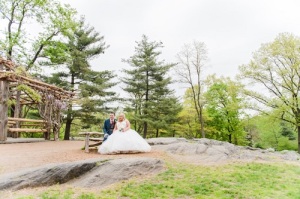 2 Responses to Hollie and Craig’s Wedding in Cop Cot