Posted on November 12, 2013 by wedincentralpark

Diane and Ian came from Scotland to New York to get married in Central Park in August. They had met through a mutual friend in 2009 and had been living together in Edinburgh for three and a half years before their wedding. They had got engaged on Christmas Night in 2012, at home. 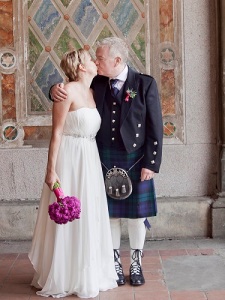 They decided quite quickly that they wanted to get married abroad and New York is one of their favorite cities so they felt as if there was only ever really one choice of location that felt right to them. They loved the idea of having their wedding photographs taken in different locations around Central Park.  The fabulous Andy Mars took their photos, Diane said “we have many favorites, standing at the water’s edge looking over to Bow Bridge, the Fountain and under the archway, we also had some great black and white photos.” 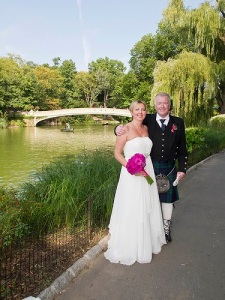 They chose Wagner Cove for their ceremony location. It is a small, rustic wooden shelter, dating from the Park’s first years. Back then, visitors could be picked up in a rowboat from one of six shelters just like this one and then be dropped off at another just the same at another point along the side of the Lake. Diane said “it just seemed the perfect place, not too big and a great setting next to the water.”

Since Diane and Ian were organizing all the other parts of their stay themselves, and mostly by email, they did have some worries that something might have gone wrong. But as Diane said, I had arranged the permit, officiant and photographer so they felt confident that even if any other plans did not work out for any reason then they would still be getting married, which was the important part. 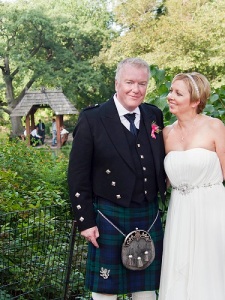 Diane and Ian were joined by sixteen friends from Scotland, and four adults and one flower girl from the US. Diane said “they all loved the idea of us getting married in Central Park and everyone said they had a day they would never forget.” Diane wore an ivory strapless wedding dress purchased at Monsoon in Edinburgh and Ian wore a kilt. Diane’s flowers were cerise pink gerberas. Ian and the male guests wore thistle buttonholes. The ladies all wore pink or cream corsages.

They had a lovely wedding day. All the men left SoHo a few hours before the ceremony to have a few beers near to Central Park, leaving the ladies to enjoy Champagne in the garden of the James Hotel, where they were staying, before travelling up to Central Park themselves. Ian had arranged a piper, Matthew Welch of New York Metro Pipe Band, for the afternoon. They said “he was absolutely fantastic and helped make the day so special.” After the ceremony, as they moved around the different areas of Central Park for photographs with their guests, they took Matthew along, who continued playing the pipes, which attracted many interested on-lookers. After that they all headed to Sambuca on West 72nd Street, which they had booked in advance for their reception. Diane said they had a fantastic meal there and the staff made them feel very welcome. 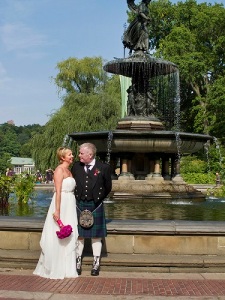 I asked them if they had any final thought to share of getting married in Central Park and Diane said “the backdrop of New York City and the people in Central Park made it the perfect wedding venue that in our opinion could not be bettered anywhere.”