Posted on September 15, 2013 by wedincentralpark

Lewis and Sylvia came to New York City to get married this August. Sylvia is French and Lewis is British and they live together in the UK. They met in June 2009, at Lewis’ work in the UK where Sylvia had an internship at the time. Lewis proposed to Sylvia on her 21st birthday, “it was simply magical,” said Sylvia, “that night it was quite chilly outside and he forced me to go on the balcony to admire the view. I was so cold, I so wanted to go back inside I almost missed the best moment of my life!”

When I asked them why getting married was important to them Sylvia said “we both think marriage is important to express our love to each other, and to solidify our commitment to each-other.” They both enjoy travel so started to consider New York early on in their discussions about wedding location. They considered Sylvia’s home of France and Lewis’ home of the UK, but either way some family would have to travel. They had to work hard on their family for them to agree to travel such a distance to New York, but in the end they did and now all the family says that they wish they could do it all again! They did have a second wedding back in France after their return from the US.

Sylvia had visited New York for the first time when she was ten years old and since then she had always dreamed of being a bride in Central Park. So, this was her dream come true. “Central Park is just a magical place; peaceful and beautiful,” said Sylvia. 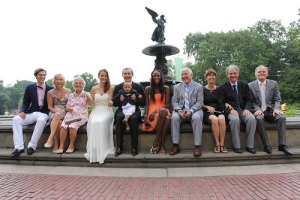 I asked them if they had had any concerns about having a wedding in Central Park, and they said that they were a bit worried about the paperwork and making it legal back in Europe, “but Claire helped us so much and reassured us. It is actually the easiest process ever.” This is possibly the second most common worry (after the weather) but in this era of electronic records it is quite simple to get married in a foreign country and have your own country recognize it as legal. I know this because I have done it myself.

They stayed in New York for one week at the beautiful Waldorf Astoria on Park Avenue. “It was absolutely wonderful, said Sylvia, “the day of the wedding we walked through the lobby and I wanted to be as discrete as possible, but there was a Jewish reunion of two hundred people and they all screamed ‘mazel tov’ and gave us a round of applause. This marked the start of a long and wonderful day of compliments all around New York.” This is quite a common occurrence with the couples I work with; many of them want to keep their weddings low-key and quiet, but the New Yorkers just will not let them, and they will stop them to congratulate them, which is charming and adds to the experience. 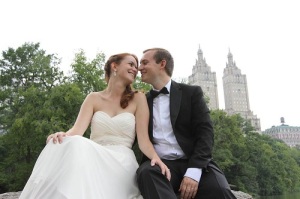 “When we came back to our hotel for cocktails we met Sir Ben Kingsley and we had a lovely chat and few nice photos,” said Sylvia. I’m so jealous. To finish the day off, they had dinner at the Central Park Boathouse.

Sylvia wore a Dessy dress and carried a bouquet of pink Peonies. Her mother in law did Sylvia’s hair and make up for her. They had Windcatcher Photography capture their memories from the day, and he did an excellent job. The wedding ceremony was on Bow Bridge and they got lots of fabulous photos in their ceremony location. They also had lots of pictures taken around Central Park, at Grand Central Terminal and then at the Top of the Rock, my personal favorite spot to get aerial pictures of Central Park. Sylvia said “getting married in New York is just magical, everyone on the streets stops to take photos of you and congratulate you, it is just wonderful that such a big and vibrant city still loves weddings and still have a sense of romance and take time to stop for you.”

I asked Sylvia if she had any closing thoughts on getting married in Central Park and she said “if you are considering getting married in New York City please don’t hesitate, this day will be the best day of your life no matter the weather or any other little trouble. New York is New York after all.” I can’t argue with that. 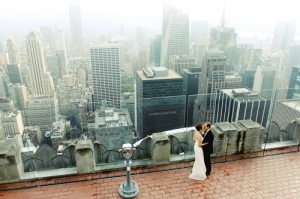 Thanks so much for sharing your beautiful photos and the story of your wedding day with us, Sylvia and Lewis. I wish you lots of love and luck for your future together. For more information to help you with planning your own Central Park wedding, visit our website, or “like” us on Facebook, follow us on Instagram and follow us on Pinterest where you will find lots of lovely photos and many more inspiring stories of real weddings.