Alice and Jim’s Central Park Elopement in the Snow

Posted on February 4, 2013 by wedincentralpark

Alice and Jim travelled from Exeter in the UK for their beautiful, snowy Winter Central Park wedding. Alice moved to Exeter to attend University in 2009, and got to know Jim as she regularly went into his video game store, Game. They did not get together straight away, but as Alice got closer to graduating from University they started to spend more time together. One night, they bumped into each other in town, and they rest as they say, is history.

Alice and Jim had booked a holiday to New York for Alice’s birthday, and they were talking about it when, after a beer or two, Jim casually said “we could totally get married in New York, I’d so do it.” Then the following day they talked about it more seriously and decided to actually do it. Alice told Jim he did not have to get an engagement ring but he did anyway; he said he was going to wait until Alice’s birthday (two days before their wedding day) to give it to her, but then having the ring and thinking about doing it was making him stressed so in the end he gave it to her when they were at home. “It’s probably not most people’s idea of high romance, but it was very comfortable and very us,” Alice said. 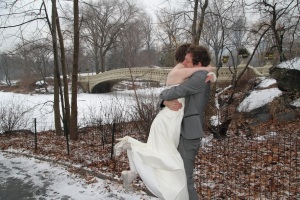 Getting married was important to Alice and Jim because they wanted to make a public display of how they feel about each other and that they are together. Jim spent all his life telling everyone he was never getting married because it was kind of pointless and all relationships end eventually (he is clearly a bit cynical sometimes) so they felt that him wanted to marry Alice, and that she wanted to marry him, made it more important. “Also my last name was rubbish and his is good, so I stole it,” said Alice. That shorter surname was big draw for me, too. 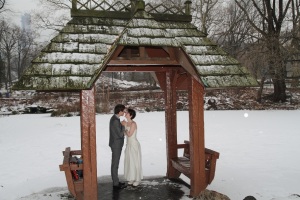 They never really considered a big wedding at home with all their friends and family “because a) it would be so much more expensive and we were doing it all on a bit of a shoestring budget, b) we would both be shy with everyone looking at us while we said our vows etc and c) you get that thing where if you invite somebody you have to invite that other person but you don’t really want to and people get offended,” this is the kind of thing I hear a lot from the brides I work with who choose to have a destination wedding. “Also we have really different tastes in buildings. I really like old buildings like castles or old Georgian stately homes; Jim likes modern and Art Deco so we could never find places to agree on”, said Alice. Olmsted and Vaux designed the Park in the 1850s, which wasn’t too long after the Georgian era so I am counting this is a “win” for the bride.

Alice and Jim loved Central Park, “it is so very iconic and beautiful, but there are loads of different little corners where you can get some privacy.” They choose Wagner Cove for their ceremony “because it’s nice and private and still has really good scenery, plus a little protection from the elements. I was hoping for visible turtles but the lake was totally frozen over, which was nice, too”. Some of their favorite pictures were taken as they walked around the Lake to Bow Bridge, they loved the shots of the city skyline behind them with the frozen lake, and as you can see, they were laughing and happy so a lot of the shots are very natural. 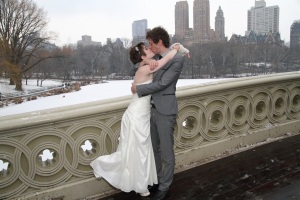 Jim wore a slim dark grey suit with a black tie and a grey shirt and Alice wore an ankle-length strapless cream dress with embroidery detail on the bust. They were lucky/unlucky (depending on your point of view) enough to have snow on their wedding day. They were both very cold, and had a few pictures taken with their coats on in the end. When they told New Yorkers that they intended to marry in Central Park that week, many said that they were crazy and it would be freezing, or “Good luck!” One guy said to Jim “You gon’ stick to your wife when you kiss her!” but I think many will agree that the beautiful photos are worth an hour of shivering. “Everyone back home is actually really jealous. Our wedding photos and location are way better than other couples we know,” said Alice.

Before they began planning, back in November, they were not sure of the procedure for getting married in New York “but Claire was really helpful and gave loads of advice about what we needed to get, and where from”, said Alice. “We went to get our marriage license on our first day and then walked back up from the Office of the City Clerk all the way to where we were staying near Times Square, so it was actually a really nice opportunity to see the city. Strangely, the -10 temperature never concerned us that much”. Yes, that does sound quite strange to me. 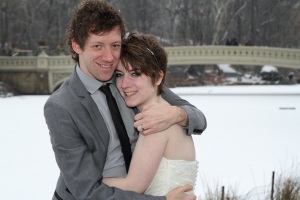 Alice and Jim stayed in the Metro Apartments for seven nights. They were pleased with it, “the rooms all have a little kitchen area with a hob, microwave, fridge, etc. It was a really nice location, just a couple of blocks over from Times Square and close to Hells Kitchen and a lot of nice restaurants.” Their post-wedding lunch was at Serendipity 3, because they had been there before and they knew it was great. “They had the best dessert I’ve ever eaten in my life, the Forbidden Broadway; a big sundae made of vanilla ice cream, whipped cream, chocolate brownie and loads of hot fudge sauce.” While they were there they also ate in Ellen’s Stardust Diner. They recommend it, the wait staff are all hoping to break into Broadway shows so they spend the whole time taking it in turns to sing show tunes. “It’s definitely a one-of-a-kind experience.”

They did have plans to go skating at the Rockefeller Center in the afternoon but it rained so they took shelter in the Ripley’s Believe it or Not. “Probably not what everyone would plan as their ideal wedding day, but we were giggling and having so much fun, “ said Alice. Well, that is what a destination wedding is all about – doing whatever suits the tow of you, rather than doing what convention dictates.

Alice and Jim were happy with how everything went on their special day. “Claire has been unfailingly helpful and nice, so a potentially stressful experience went down without a hitch. Apart from the obvious hitch. We only had an our scheduled for photographs but Ande and Dany both stayed with us for almost two hours and even gave a kind of mini tour of a bit of the Park. They even stopped in the middle and had a cup of coffee with us to warm up. I honestly don’t think any of you could have been kinder. Thanks for helping with the best day of our lives.” We at Wed in Central Park never rush our couples and we are always happy to deal with any of your requests. This is simply because we love doing what we do. Thank you for letting us be involved in your wedding, Alice and Jim. 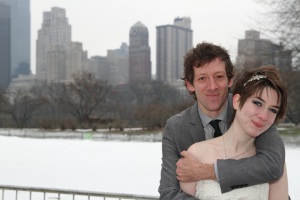