Posted on December 11, 2012 by wedincentralpark James and David are from Glasgow in Scotland and have been together since 2003. James proposed to David on Valentines Day in 2010. The plan was to have a very long engagement. Then it just happened that they were planning to go on a holiday with a stop-off in New York (on the way to San Francisco and Orlando) with two friends. They realized that the new New York state marriage equality bill would be effective by the time they were in New York… that got them thinking …

The couple discussed the idea of marrying in New York, and very importantly, got the go-ahead from the friends they were travelling with. They considered various New York typical wedding venues of buildings and hotels, and in their search, came across the idea of a wedding in Central Park. Straight away they knew that was what they wanted, but, being British, they were concerned about the weather. They checked a farmers almanac for weather on their chosen date and found that it has rained just once in the past one hundred years.

They considered several locations. On their short-list were Bethesda Terrace, Bow Bridge and Wagner Cove. Then they spotted a little structure called Cop Cot – translated as little Scottish house on the hill. Aptly named for a Scottish couple, and such a lovely little location.

James and David told me that they had enjoyed their visit to the City Clerks Office the day before the wedding to collect their marriage license. “If anyone ever has a spare hour in New York I thoroughly recommend grabbing a coffee and doing some people watching in the City Clerks Office,” James said. Personally, I love the area around it, there are some of New York’s oldest buildings in that area, and, like James and David, I went back to the Courts to collect our marriage certificate in person rather than wait for it to be posted, and you get to go inside the fancier court building then. 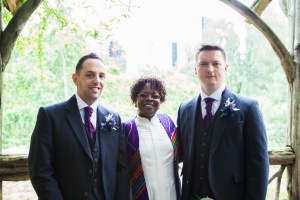 James and David happened to have a friend in New Jersey, so he was also a guest, and two other friends from home and even a friend from Hong Kong surprised them by coming along, too. So, with the two friends who they had originally planned to be on holiday with, James and David shared their wedding day with six close friends. They all loved the idea of having an outdoors wedding in Central Park. The four of the original holiday group stayed in The Roosevelt Hotel on East 45th and Madison Avenue. They said it was in an excellent location with with great service and good rooms.

They got up early on the day of their wedding and went to Pershing Square for breakfast. At this point James and David were feeling pretty glum because it was raining. For the second time in one hundred years it was raining on the 5th of September! As I often tell couples, New York doesn’t usually get the day-long drizzle that countries such as Britain get, and in New York City a short, sharp shower will often get the rain out of the way. They said that by lunchtime the rain had dried up and they have beautiful sunshine for the rest of the day.

I love a man in a kilt, and there are four of them at this wedding! The photos of this wedding are beautiful, and it looks like they had such a fun day. The theme was based around purple and thistles. They wore the full Scottish traditional dress in the Scotland Forever tartan.

The day was topped off with dinner in Fives at the Peninsula and then cocktails on the rooftop at Salon De Ning so they got come fabulous pictures of the Manhattan skyline in the evening.

The couple had a huge reception when they returned to Glasgow, so as to be able to include a wider circle of family and friends. They even created an excellent website to share their special day in New York with their friends back home.

When asked to sum up their experience they said “if you are thinking of marrying in Central Park the only advice we can give is go for it. We wanted a day to remember and having our ceremony in Central Park helped make it so. If you too want your wedding to be different and special then this is a location that will contribute to that.” 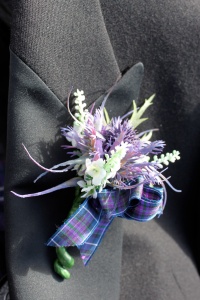