Posted on September 12, 2012 by wedincentralpark 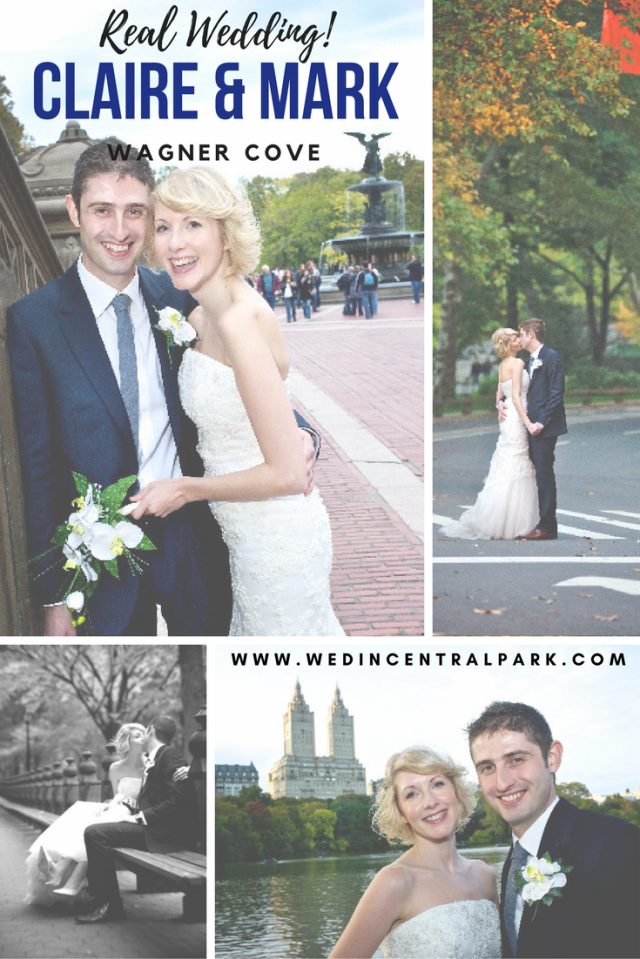 Mark and Claire had been together for over six years when they got married in Central Park in October 2010. Mark is a full time professional session drummer who has toured all over the world and Claire is a dressmaker, designing luxury childrenswear. They are now living in Manchester in the UK, but they got engaged in Claire’s seaside home town of Brighton, at the end of the pier by moonlight.

When discussing wedding locations they had looked at the standard wedding venues in their home town, but they said that “nothing gave us that special feeling. We always came away disappointed and feeling something was missing”. Mark was on tour in Texas and on the way, they both had a short stay in New York and fell in love with the city. After having considered venues in the UK they started to think about how fantastic it would be to marry in New York City. They scoured the internet looking into the legalities and doing quick calculations on flight prices and hotels and agreed that it could be a possibility. They wanted their nearest and dearest to join them, and luckily they all agreed to come along. 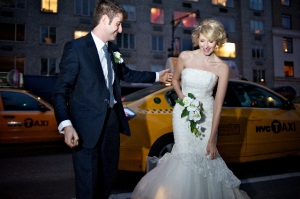 They said that Central Park was really the only venue they considered, “we both love how Central Park has such a romantic feeling about it and love how it can be so quiet and intimate yet bustling and exciting all at the same time”. They loved having a small destination wedding, they were both aware how often planning a wedding can be stressful for a couple but they said that they felt no stress planning their wedding.

Their ceremony was in Wagner Cove. They said that they chose it because “it felt as if we were in our own private area, tucked away in this beautiful park. It has a gorgeous wooden shelter next to the lake with two small benches, for our parents to sit”. They also loved their photos taken at Bethesda Terrace, “we felt it really captured the heart of the park and the pictures underneath the arches look incredible. We also love the ones taken with views of the Dakota building in the background, also the ones where we are walking through the park, with all the beautiful foliage on the trees look so romantic and really bring back memories of our day”. They have lots of lovely photos of their day in all the prettiest parts of the Park, some of them are posted below. 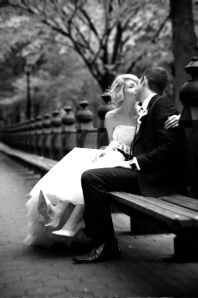 Mark wore a dark blue suit with tan loafers and Claire wore a beautiful custom made ivory fishtail fitted dress with a lace overlay and soft tulle skirt. For flowers they brought silk flowers in England and took them with them – white orchids with green leaves. Claire said they packed beautifully and looked as if they were fresh on the day, they look really good on the photos too.

Mark and Claire’s immediate family and two best friends were their guests at their wedding. They were all as excited as the couple to be going to New York and for both sets of parents, it was their first time to America so they were particularly excited! They stayed in New York City for a week so everyone was able to see all the famous landmarks, and have a fun time together. 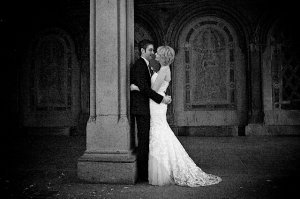 Claire was fairly relaxed about hair and make up, she did her own make up and and didn’t arrange a hairdresser until the day before the wedding. She had asked the concierge in the hotel for a recommendation and she was able to find someone to come to the hotel and do Claire’s and her mother’s hair on the morning of the wedding.

They had a horse drawn carriage to Wagner Cove. They said the ride through the park was so much fun. “Everyone was shouting congratulations and waving to us!” And they were also able to see all the sights in the park. 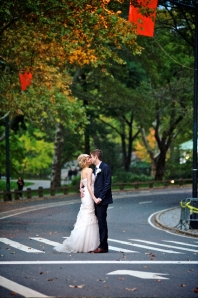 Claire and Mark had planned their vows with their officiant beforehand, so they had a lovely, personal ceremony. After the ceremony, their guests took bikes through the park to the wedding restaurant, Sarabeths on Central Park South, whilst the couple had lots of photos taken around the Park. Their photographer was Brian Friedman and they said they couldn’t be happier with his pictures.  The restaurant sectioned off and decorated one of the rooms at the back of the restaurant so they could have their own private dining area with a small dance floor. They also took their own ipod so they could play their own music. 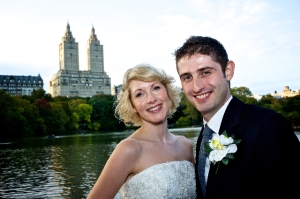 Claire and Mark summarized their wedding by saying “we could not have wished for a more perfect wedding day. The whole atmosphere was beyond our expectations, the park is so breathtaking, there is no need to have decorations or flowers, the park itself is the ultimate backdrop. It is bustling with people all wishing you a happy marriage and there are so many characters and things going on. Our day was so personal and intimate, we were able to enjoy every minute, without any stress and with the people we love the most. We felt as if we were in a fairytale. To top it off, we discovered when we returned to the UK, we were expecting our first child, conceived in New York!” 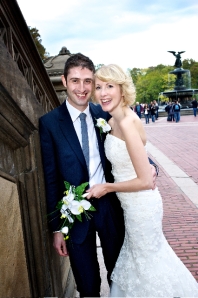